Toy Poodle vs Miniature Poodle – Can You Spot the Differences?

You are here: Home / Breeds / Breed Vs Breed - Compare Your Favorite Breeds Of Dog / Toy Poodle vs Miniature Poodle – Can You Spot the Differences? 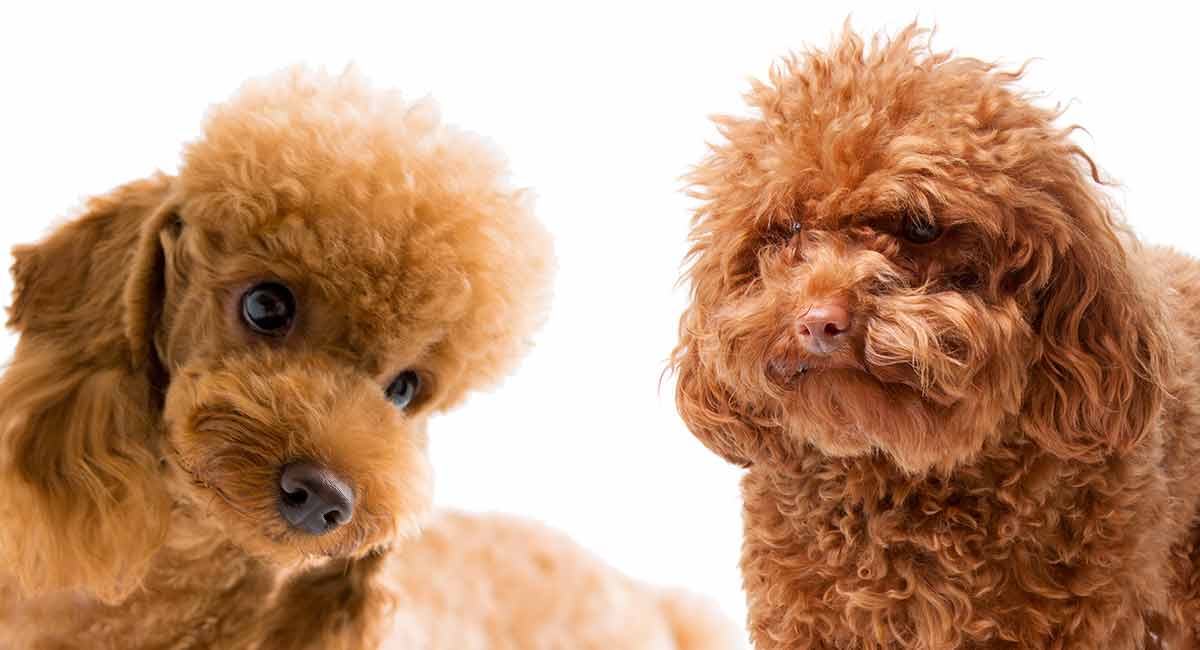 How different is the Toy Poodle vs Miniature Poodle?

If you’re struggling to decide which of these two breeds will fit in best with your home, look no further!

Here we’ll compare everything you need to know about the Toy Poodle and Miniature Poodle.

Let’s find out exactly what makes these two popular breeds so special.

Learning your favorite breed’s history can be really fun, as well as interesting!

So what about the Toy Poodle and Miniature Poodle breeds?

Toy Poodles and Miniature Poodles both descended from the Standard Poodle breed.

The Standard Poodle was originally used as a duck retrieving dog so spent a lot of time in the water!

But the purpose of the breed changed a little as time went on.

The Miniature Poodle became popular with richer classes in France.

The Toy Poodle was created a little later.

This breed originally started out in America in the early 1900s.

The Toy Poodle was bred to be a companion dog.

And its size made it the perfect choice for this role.

So the two breeds had very similar purposes and origins, although one is a little older than the other.

But are the rest of their characteristics as similar as their histories?

The main difference between the Toy Poodle and the Miniature Poodle is their size.

The Miniature Poodle stands slightly taller, at 15 inches and under at their shoulder.

Whereas, the Toy Poodle is smaller, only measuring up to 10 inches when fully grown.

Both breeds, however, have the same proportions.

Although these breeds are both relatively small, they each have a solid build and appear elegant and strong.

Both breeds have dark, oval eyes with a rounded head and a long, straight muzzle.

However, they can also be a combination of any of these colors, too.

The Poodle coat is probably one of their most well-known characteristics.

The coat on Miniature or Toy Poodles is curly and thick.

It is not only popular for the unique look it gives this beautiful breed but because it is very low-shedding.

But we will look at the maintenance of this beautiful coat a little later in the article.

Both Miniature Poodles and Toy Poodles have similar temperaments.

Both breeds are friendly and generally outgoing.

Although this confidence can also depend on socialization levels.

The Miniature Poodle and Toy Poodle are both very intelligent breeds.

Both breeds love being around their family and are very eager to please.

Aggression is another important trait that people consider when getting their latest dog.

All Poodle breeds are known for their eagerness to spend time with their owners.

Duffy et al. actually found that Poodles (including Miniature and Toy varieties) were one of the lowest scoring breeds for aggression to owners and other dogs.

However, they suggested they scored slightly higher for aggression toward strangers.

They suggested Poodle breeds also scored higher for territorial traits such as barking.

Other studies, such as Houpt, suggest Toy and Miniature Poodles scored higher than average for dominance and fear-based aggression.

You should start socialization for your Miniature or Toy Poodle as early as possible to help avoid any potential aggression.

This will help reduce any territorial fear, which can result in aggression toward strangers.

The Standard Poodle breed that both the Miniature and Toy Poodle descended from was used as a retrieving dog.

They are likely to take to water but also will love retrieving things for you.

This can be great when you’re looking to play fun games like fetch with your dog.

However, it can become frustrating if your dog tries to retrieve things you don’t want it to.

Training from an early age can help to control these natural instincts so that your Miniature or Toy Poodle is well behaved.

However, as Miniature Poodles, and especially Toy Poodles, were bred as companions, they are also going to love spending time relaxing on your lap at the end of each day.

Let’s take a look at training next.

Training is important for all of our dog breeds, no matter what their size.

You might think simple obedience tricks can be forgotten for smaller dogs – what harm can they do?

But having a well-trained dog can really make life a lot easier, no matter their size.

So how easy are the Toy Poodle and Miniature Poodle breeds to train?

As we’ve seen, both are intelligent breeds, which can really help with training.

Because both are also eager to please, you have a winning combination!

Your Miniature or Toy Poodle will not only love the mental stimulation that training gives, but they will also love the excuse to spend time with you.

For best results when training your Toy or Miniature Poodle, you should start training as soon as possible.

Starting training and socialization from an early age will help your Poodle grow into a happy, confident, and well-behaved adult.

These include obedience, agility, and tracking, among others.

Their love of water can also make them great at dock diving.

Because the Toy Poodle and Miniature Poodle are both very small dogs, you might assume they don’t need much exercise.

But is this really accurate?

No matter what their size, every Poodle breed tends to be quite active.

The Toy Poodle and Miniature Poodle breeds both have high energy levels.

Not only does exercise keep them happy and healthy, but it can be another great way to bond with your dog.

This doesn’t have to be the same thing every day!

Both breeds will be happy to get sucked into any form of exercise you provide, whether you take them swimming, for walks, or play fun retrieving games like fetch!

As long as you provide your Poodle with this regular exercise, it can make a happy home pretty much anywhere!

Unfortunately, health and general care is a major topic to consider no matter what dog breed you have.

All dogs can get ill at some point, and most breeds have some relatively nasty hereditary health conditions

But what about the Toy Poodle and Miniature Poodle breeds?

Toy Poodles and Miniature Poodles do share some health concerns.

Both breeds can be prone to problems including

Health testing by breeders can be a good way to minimize the risk of these health conditions in your Toy Poodle or Miniature Poodle.

Health doesn’t just include potential illnesses your dog can inherit.

There are a lot of factors that go into caring for a dog, and grooming is one of those.

With fur like the Miniature and Toy Poodles, this is no simple task..

Although neither of these breeds shed often, they do have thick curly fur that needs a lot of attention to prevent matting.

Some owners avoid this by simply clipping their Poodle’s fur short.

But if you don’t want to do this, you’ll have to be prepared to groom your Miniature or Toy Poodle daily.

You need to groom your Poodle’s fur all the way to the skin to prevent matting close to the roots.

Alternatively, many people choose to take their Miniature or Toy Poodle to a groomer so they don’t have this stress!

Alongside fur care, you should regularly trim your Miniature or Toy Poodle’s nails and check its ears for excess wax build ups.

There are plenty of other breed comparisons for you to read if you’ve enjoyed this one!

Take a look at some below.

Are you still not sure which Poodle breed is for you?

Both the Miniature Poodle and Toy Poodle are very similar dogs, with the main difference being their size.

These breeds each require regular exercise and grooming, so they are not low maintenance dogs.

However, they are both people-oriented breeds that can suit most families dedicated to giving them this care!

Have you got a Miniature or Toy Poodle?

Which breed do you think is best?

Shorkie – Is The Shih Tzu Yorkie Mix The Perfect Lapdog?
Next Post: German Shepherd Dog House – A Safe Place for Them to Stay