Gordon Setter vs Irish Setter – How Do They Compare?

You are here: Home / Breeds / Breed Vs Breed - Compare Your Favorite Breeds Of Dog / Gordon Setter vs Irish Setter – How Do They Compare? 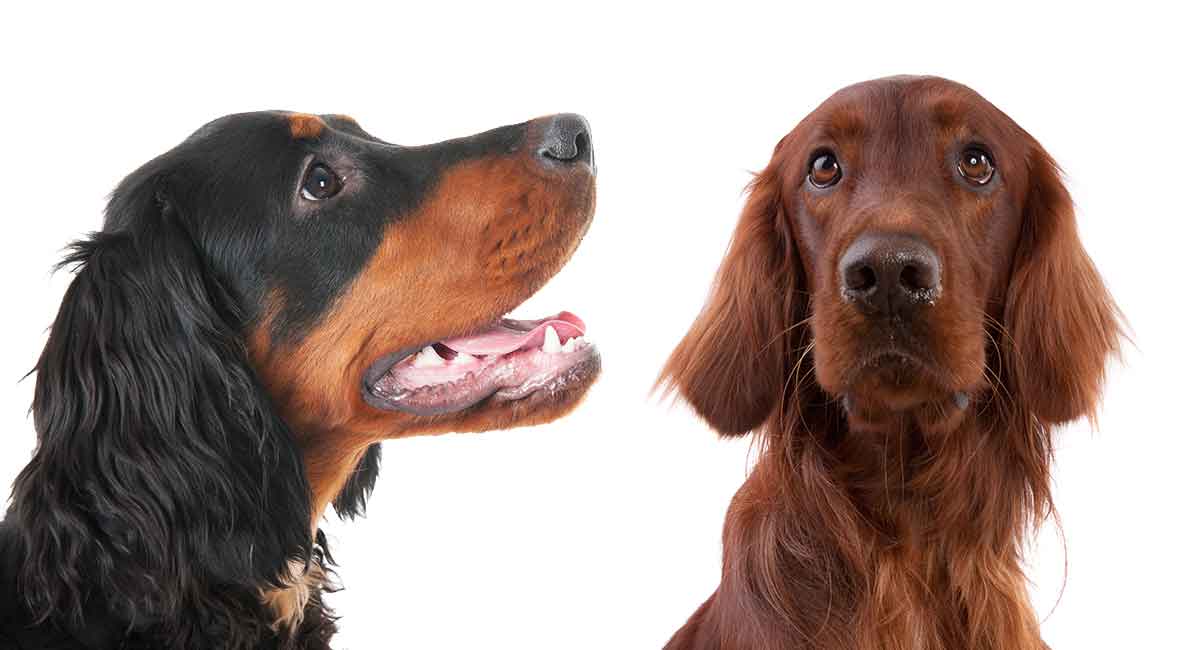 So you’ve been on the hunt for a big dog to join your family, and you’ve decided it’s a matter of the Gordon Setter vs Irish Setter.

At first glance, these dogs seem very alike – both in their appearance and in their general temperament.

After all, with their hunting dog pedigrees, both Gordon Setters and Irish Setters have that same alert athleticism, fierce loyalty, and hunger for exercise.

It can be tough to make a call on which of these breeds will best fit your family.

You’re in the right place.

In this guide, we’ll give you the key information you need to decide if a Gordon Setter or Irish Setter is the best fit for you.

We will be looking at their physical features, their temperament, and their general health.

Physical Differences of the Gordon Setter vs Irish Setter

It’s stating the obvious to say that these are both strikingly large, distinctively noticeable dogs.

There are, however, subtle differences in their size and physiology.

The Gordon Setter is a slightly more muscular and shorter dog, weighing in at around 75 to 80 pounds and standing 23 to 27 inches tall.

The Irish Setter is a touch lankier and longer boned, typically weighing slightly less, at 65 to 75 pounds, and standing 26 to 28 inches tall.

Both dogs are long in appearance.

Everything about them, from the length of their facial features to their long limbs and undulating, feathered fur gives the impression of length.

The Gordon Setter’s musculature leans toward endurance, with a burly chest and a touch more muscle bulk in its legs.

In looking at the coats of the Irish Setter vs Gordon Setter, there are obvious similarities.

Both are moderately shedding dogs.

Weekly grooming and ear-cleaning is important, and both setters will benefit from monthly bathing.

The Gordon Setter is black with tan markings, and its fur has a thickness to it.

For this reason, shedding is quite visible.

The Irish Setter, by contrast, has finer fur, and of course its coat is that famous, warm, russet red.

Because the fur is so fine, grooming can be a little more work with an Irish Setter.

When it comes to Gordon Setter vs Irish Setter temperament, things get interesting.

Clearly these dogs are cut from the same cloth.

However, there are some basic differences with big impacts on the kinds of family to which they’re suited.

Gordon Setters and Irish Setters are equally loyal, family-focused, energetic, and predisposed to forming close emotional bonds with their humans.

The Gordon Setter leans toward being more alert and a little more aggressive.

When a Gordon Setter meets strangers, it can be reserved at first.

It can also be socialized to be extremely gentle and loving with small kids.

It has a natural tendency to be careful and aware of its strength.

The same can’t be said for a Gordon Setter’s attitude toward other pets!

It has a strong prey drive, so it’s not a great dog for cat homes.

You’ll also need to be especially vigilant when introducing a Gordon Setter to new dogs.

The Irish Setter is more excitable, more energetic, and a generally more sociable dog than the Gordon Setter.

It’s a breed which loves the limelight and gets a kick out making new friends.

While the Irish Setter loves kids, it can become a little enthusiastic and not know its strength!

For this reason, it’s not an ideal dog for families with small children.

With the right socialization when young, you’re much more likely to train an Irish Setter to get along well with other dogs and small animals.

Both dogs are quick learners, hard workers, and like to be useful.

The Gordon Setter has a more pronounced social intelligence.

It wants to hang out with its owners a lot and is adept at adapting well to home life.

The Irish Setter’s intelligence leans a little more toward mischief!

They need mental stimulation to stay happy and if they aren’t given it, there’s a very good chance they’ll wander off to find their own fun.

They both have a stubborn kind of intelligence, which means it’s a good idea to find challenging ways to push their boundaries.

The Gordon Setter has stronger hunting instincts and can also be a little more sensitive to correction.

This is a dog you’ll need to meet halfway at times.

As such, they’re more suited to dog owners who have some experience with training.

The key to training an Irish Setter is to get past that mischievous streak!

Generally, they’re easier to train because they’re less aggressive and it’s easier to work with their natural desire to please.

Both Gordon Setters and Irish Setters will need exercise and plenty of it!

The Gordon Setter is generally a little more happy to relax at home, whereas the Irish Setter is going to be happiest with exercise or play at least twice a day.

When it comes to Gordon Setters or Irish Setters, you’ll encounter many of the same health issues.

Gastric torsion: Also known as bloat, this is a serious condition, common among large dogs.

Gordon Setters are also known to suffer from cerebellar abiotrophy, a brain condition in which cells in the cerebellum die, causing gradual neurological degeneration.

For more information on health conditions in Irish Setters, check out The Happy Puppy Site.

Gordon Setter or Irish Setter – Which Pet Is Right for Me?

Both setters are amazing dogs for a highly active family seeking a big dog with a strong, loving personality.

The Gordon Setter is going to thrive most as an active home-focused dog.

The breed is great with small kids, but to get the most out of a Gordon Setter, you’ll probably need to be experienced in training strong-willed dogs.

The Gordon Setter is definitely not a dog to live alongside small pets.

The Irish Setter is going to lap up as much exercise, attention, and play as you can throw at it!

This is a mischievous, fun-loving breed who lives for family.

However, the Irish Setter’s natural ebullience may make it a less than ideal choice for a family with small children.

Good luck in finding the right setter for you.

“Degeneration of the Image Forming Part of the Eye in Dogs,” PetMD

Petersen-Jones., 1998., “A review of research to elucidate the causes of thegeneralized progressive retinal atrophies,” The Veterinary Journal

Ziener, M L et al., 2015., “Genetics and epidemiology of hypothyroidism and symmetrical onychomadesis in the Gordon setter and the English setter,” Canine Genetics and Epidemiology

Labrador Pros and Cons – The Good, The Bad, and the Hairy!
Next Post: Dog Fleas – Getting to Know Your Itchy Enemy and How to Defeat Them