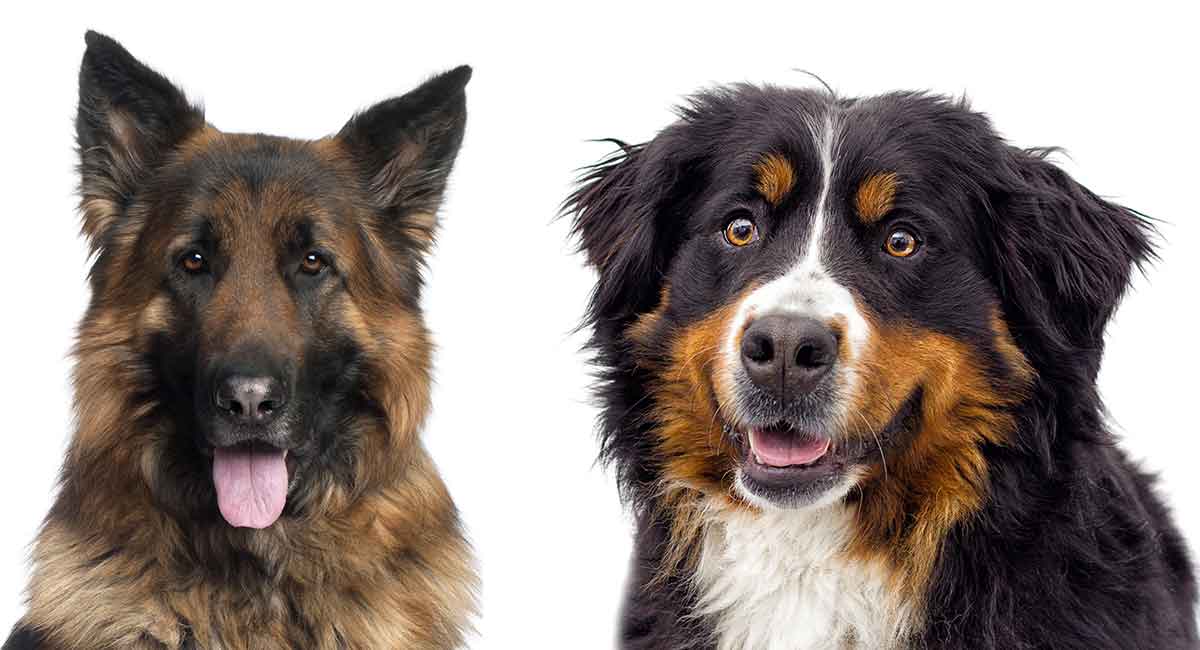 The Berner and German Shepherd breeds were founded for very different historical reasons, and they have different looks and temperaments too.

Their mixed breed puppies can be very variable and surprising!

This designer mix between a Bernese Mountain Dog and a German Shepherd Dog could be the energetic, friendly, and loyal companion you’ve been looking for to complete your family.

But before you run to your local breeder or rescue, it’s important to know what you can expect from this remarkable hybrid.

If you’re looking for the brains of a German Shepherd and the calmer demeanor of a Bernese, then you may have found your match.

But be prepared to get outside and play with this hybrid, because you can bet it’s going to be raring to go.

Where Does the Bernese Mountain German Shepherd Mix Come From?

To understand what this mixed breed is all about, we can look at its better-known purebred parents.

In the late 1800s, a German cavalry officer named Captain Max von Stephanitz had a vision. He wanted to create the ideal herding dog, so he bred herders from across northern and central Germany until he had successfully produced the first German Shepherd Dogs.

This new breed’s intelligence, speed, and agility quickly made the GSD popular among sheep farmers worldwide.

Over the years, the demand for herding dogs has all but disappeared, but the authoritative GSD has proven itself to be the ideal worker in another area as well: law enforcement and military.

These dogs have a long history of working on farms in the agricultural region of Bern, Switzerland.

There they were used as cattle drivers, guard dogs, and – most notably – drafting dogs who could pull loads many times their own weight.

Just as the GSD was coming into existence in the late 1800s, the Bernese Mountain Dog went through a precipitous decline in both quality and numbers.

Thankfully, a Swiss breed club took an interest in the dogs and successfully reestablished the breed.

In 1926, the first Bernese Mountain Dogs came to the United States, where they quickly became very popular as both farm dogs and as loyal companions.

Because it is a mixed breed dog, there is no well-documented origin story to share about the Bernese Mountain German Shepherd mix, but the motivations behind creating new designer mixes are usually similar.

Mixing two purebreds together tends to decrease the likelihood of some health issues.

Also, mixed breed dogs will have some combination of the traits of both parent breeds.

So creating a new cross can help temper a breed’s less-desired traits.

But with a mix, there are no guarantees!

This mix is often referred to as the Euro Mountain Sheparnese.

Some of the earliest canine movie stars were German Shepherd Dogs.

Two of them – Rin Tin Tin and Strongheart – even have their own stars on the Hollywood Walk of Fame!

Bernese Mountain Dogs are popular celebrity companions and can be found at the side of A-listers like Hillary Duff and Chelsea Handler.

Actress Sarah Michelle Gellar lost her own Bernese in May of 2019 and remembers her as the “most loving dog and friend.”

The Bernese Mountain Dog is an extra-large breed, and the GSD is a large breed dog.

As a result, a mix of these two breeds can be expected to be quite large, with males standing between 25 and 28 inches tall at the withers and females slightly shorter at 23 to 26 inches.

There is a large weight range with this mix, depending on whether the pup inherited more of the herding or the drafting body type.

Their bodies tend to be very proportional, with a long muzzle and ears that may be erect like a GSD or floppy like a Bernese.

They have thick, medium-length coats that vary in color but tend to resemble the Bernese more closely.

That means black, tan, and cream colors are most common, with white often seen on the chest or face.

Both breeds are loyal family members who tend to be good with children.

While the more relaxed Bernese Mountain Dog is known as a gentle giant, the German Shepherd Dog is happiest when there’s a job to do.

Since both parent breeds were originally farm workers, the Bernese Mountain German Shepherd mix can be expected to be very energetic and keen to be put to work around the home.

These dogs will be very friendly and loving with their families.

However, there is a chance that they could act aggressively toward strangers or other dogs.

According to a 2008 study of breed differences in aggression, the German Shepherd ranks among the highest in both inter-dog and stranger aggression.

The Bernese, on the other hand, is among the least aggressive breeds.

So it will be important to socialize the Bernese Mountain German Shepherd mix well.

Give it plenty of exercise, and focus on early training.

This dog needs confidence to be the trustworthy and faithful companion you want.

One of the best features of this mixed breed pup is that it tends to inherit some of the calmness of its Bernese parent while boasting the brains of the Shepherd.

That means your puppy will be keen to pick up new skills and is likely to potty train and crate train more easily than less motivated dogs.

But it also means that you’ll have to dedicate a lot of time and energy to training.

It would be wise to start young and train it like a purebred German Shepherd Dog.

Socialization is extremely important for these dogs.

Exposing them to as many new people, dogs, and situations as possible will minimize the chance they’ll develop the aggressive tendencies mentioned above.

To get the most out of training sessions, exercise your Bernese Mountain German Shepherd mix heavily before you start.

This will allow your pup to focus on learning.

It’s safe to say that the Bernese Mountain German Shepherd mix will be at a higher risk of developing health issues that affect both parent breeds.

These would include hip dysplasia and elbow dysplasia, conditions where the hip or elbow joints do not form properly.

While the prevalence of these conditions is declining, affected animals can develop mobility problems, pain, and early-onset arthritis.

Both of these breeds are also prone to gastric dilation and volvulus (bloat), a life-threatening condition that requires emergency surgery to replace and decompress a twisted stomach.

Other health issues affecting the GSD include:

Large breed dogs tend to have higher rates of cancer at a relatively young age, and this is especially true for the Bernese.

They are prone to several cancers, most notably histiocytic sarcoma, a devastating disease that usually affects middle-aged and older dogs.

Other health issues affecting the Bernese Mountain Dog include:

Parents of the Bernese Mountain German Shepherd mix should be screened by the Orthopedic Foundation for Animals (OFA) for hip and elbow dysplasia.

A complete eye exam of both parents by a veterinary ophthalmologist is also recommended.

There are also genetic tests available for these breeds, including a screening test for histiocytic sarcoma.

Like its parents, the Bernese Mountain German Shepherd mix can be expected to live about 7 to 10 years.

Find the longest living dog breeds in this article!

These thick-coated dogs will need daily brushing, especially during the warmer months when they shed more heavily.

Keeping their ears clean is key, so use a gentle cleanser to remove debris as needed.

Bear in mind that these large, active dogs will eat a lot of food, but exactly how much depends on the food you buy.

Ask your veterinarian how many calories your dog should eat in a day to stay healthy.

Feed a high-quality large-breed puppy food to your growing dog, then switch to an adult diet once your pup’s full-grown.

Avoid boutique, exotic, and grain-free diets, as veterinarians have found links between these diets and dilated cardiomyopathy.

Based on its parent breeds, this mix can be expected to be good with children and might suit a family with a very active lifestyle.

Most families will find it difficult to give this dog the time and attention it needs to be happy, healthy, and well-adjusted, though.

A good starting point is Adopt a Pet.

They can help you find a dog in need of a home in your area.

Whenever you’re looking for a puppy, steer clear of pet stores and any questionable “breeding” facilities that may be a puppy mill.

Check out this guide for great pointers on how to make sure you find the perfect pup.

While mixed breed dogs are growing in popularity, reputable breeders may still be hard to find.

Good breeders will have health certifications for the parents and will be very familiar with the traits of their pups.

Raising a puppy right is a lot of work, especially when you choose a clever, energetic mix like this one.

Our puppy care guide and training resources can help!

Here are some great guides to help you care for your new dog:

Pros and Cons of Getting a Bernese Mountain German Shepherd Mix

Not sold on the Bernese Mountain German Shepherd mix?

No problem. Check out some of these similar mixes:

Since this is a relatively new mixed breed, there are no rescue organizations specific to the Bernese Mountain German Shepherd mix.

Please add your breed-specific rescue organization in the comments below.

These two organizations have links to breed-specific rescues nationwide:

The Bernese Mountain Dog Club of Canada runs a nationwide rescue program there, while German Shepherd Dog rescue organizations can be found provincially.

Is a Bernese Mountain German Shepherd Mix Right for Me?

This is probably not the right choice for you if it will be your first dog.

But if you live an active lifestyle and you want to dedicate your time to exercising and training a dog, it will gladly return your devotion in spades.

Tell us about your mix in the comments below!

Erich, S. A. et al. Causes of death and the impact of histiocytic sarcoma on the life expectancy of the Dutch population of Bernese mountain dogs and Flat-coated retrievers. The Veterinary Journal, 2013.

What Genetic diseases and/or conditions should my breed be screened for? Orthopedic Foundation for Animals, 2018.