You are here: Home / Breeds / Breed Vs Breed - Compare Your Favorite Breeds Of Dog / Belgian Malinois vs German Shepherd 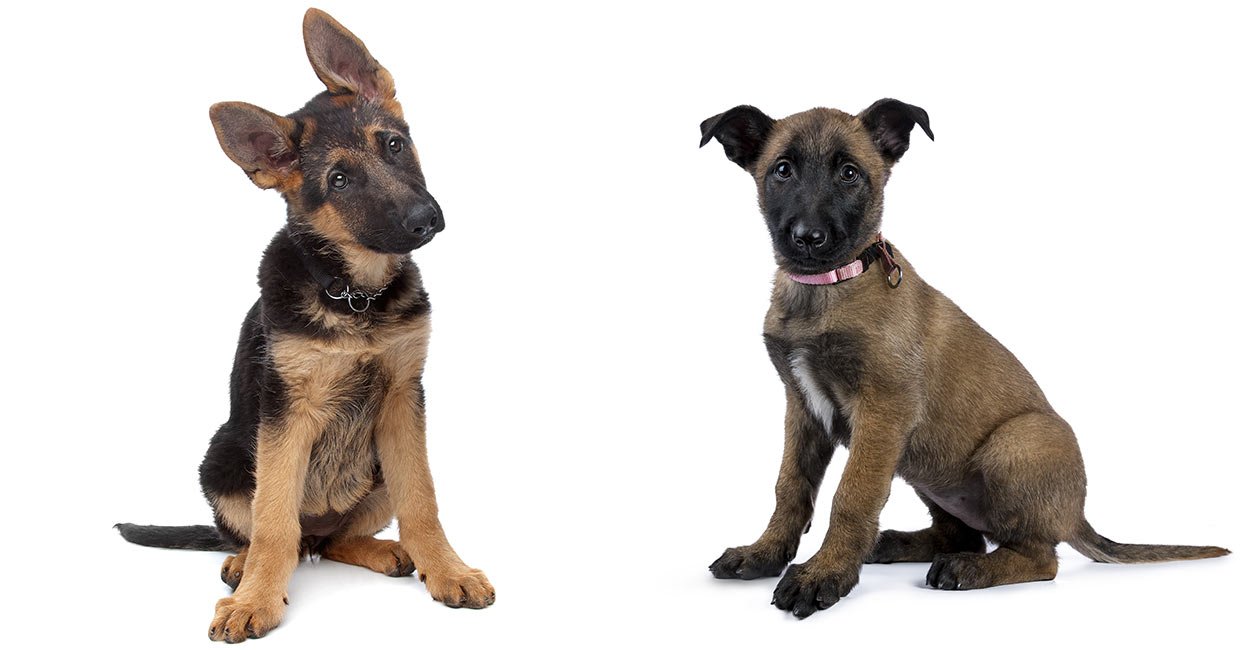 Deciding between Belgian Malinois vs German Shepherd is a tough choice.

Although these two breeds are similar, the decision doesn’t have to be impossible.

Welcome to our comparison of the Belgian Malinois and German Shepherd.

Basics of the Belgian Malinois vs German Shepherd

You are on the search for a new dog, and you have narrowed it down to two breeds: the Malinois and the German Shepherd.

Both dogs belong to the herding Sheepdog family.

They are commonly considered military or police dogs thanks to their common use in professional roles.

Both are intelligent, loyal breeds that can make great pets.

But how do you choose between these two breeds that are similar, yet unique in their own way?

There are certainly some similarities between these two popular breeds.

There are also some substantial differences that are important to be aware of.

Although relatively easy to train, they can display aggressive traits and intense guarding instincts that are important to understand.

While both breeds make you feel secure, there are potential health problems to know about before running out to get one. 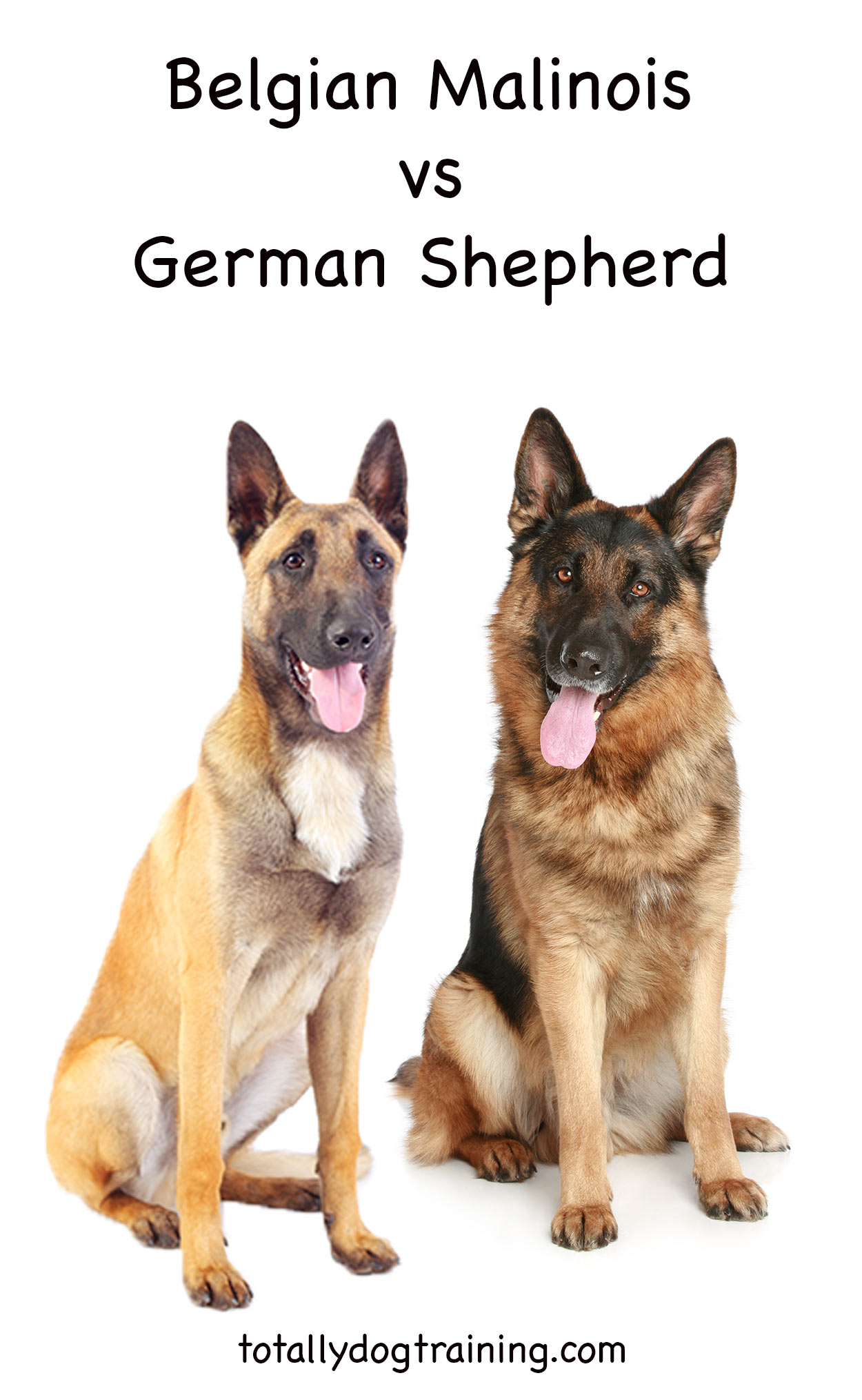 Belgian Malinois vs German Shepherd: Which Pet to Choose?

The truth is that these are both awesome breeds. There is no “best” breed between the two.

If you go with the wisdom of the crowd, the more popular pick is the German Shepherd.

In fact, the German Shepherd has been the 2nd most popular dog breed in the United States for five years and running.

They run second only to Labrador Retrievers.

The Belgian Malinois is much less common, coming in at the 44th most popular breed in 2017.

Of course, popularity is not everything.

Some things to keep in mind while making your decision are:

We’ll dive deep into each relevant category in the guide below.

For now, remember that both breeds can be fantastic canine companions.

A healthy dog from a reputable breeder is a win-win for either of these breeds.

That is, if you can provide lots of time and attention, and socialize them thoroughly.

At first glance, these two breeds look quite similar.

Both have physical features that are similar: pointed ears; a lean, muscular body; and a brown/black/tan coat.

But there is certainly a difference between German Shepherd and Belgian Malinois dogs.

While their heights are similar, the German Shepherd can run a little heavier than the Malinois.

The Belgian Malinois is also short-haired, while the Shepherd has medium-length hair.

Let’s continue with a closer look at each of the primary differences between these breeds.

The German Shepherd tends to be a bit heavier than the Malinois.

The main size difference is in weight.

For the German Shepherd, weight ranges from 66–88 poundsfor males and 49–71 pounds for females.

For the Belgian Malinois, a range of 64–75 pounds for males and 55–66 pounds for females is standard.

The dogs are typically very similar in height, but the Shepherd tends to run a little bulkier.

The German Shepherd requires more grooming and brushing than the Malinois, due to the difference in hair length.

Your Shepherd should be brushed two to three times per week to help reduce the mess made by continual shedding.

Bathing should take place only when necessary, as giving baths too frequently can strip fur of important natural oils.

Both breeds should have their nails trimmed every few weeks, and ears should regularly be checked for signs of infection.

Have a stock of bones on hand to keep your dog happy. Also, help remove tartar buildup on your dog’s teeth.

German Shepherds are sometimes jokingly referred to as “German Shedders” because of their tendency to shed prolifically.

Shedding is a year-round ordeal with the Shepherd, so regular brushing is recommended.

Additionally, the German Shepherd sheds significant amounts of hair all at once, about twice per year.

Shedding is milder on the Belgian Malinois, thanks to their shorter hair.

They are considered moderate shedders, but shed more heavily during seasonal changes (spring and fall).

They should be brushed weekly.

Both breeds share certain behavioral characteristics. They are intelligent, and can be aggressive, protective and alert.

Both the Malinois and German Shepherd are hard-working dogs that are used in a variety of important roles, including police work.

The Belgian Malinois is a bit more energetic than the Shepherd, and therefore will need more exercise.

Both dogs enjoy an active lifestyle, but the Malinois has better endurance and will need more exercise to remain happy.

Both dogs are somewhat reserved when it comes to meeting new people and even other dogs.

It can take some time for these breeds to warm up to new experiences and people.

Once they do, they are extremely loyal and loving.

The German Shepherd is more prone to separation anxiety, although both breeds can display the trait.

It’s vital to keep in mind that most of these temperament factors and behavioral tendencies can vary significantly depending on how the dog is raised.

Both these breeds have the potential to be overly aggressive and destructive if they are not trained and socialized properly.

Given the reserved nature of these breeds, socialization from a young age is very important.

If possible, we recommend asking the breeder to meet the parents of your potential pup.

The best way to predict the puppy’s future temperament and behavior is to meet the dog’s parents—particularly the mother.

Both the Malinois dog vs German Shepherd display guarding tendencies and a protective nature.

Without proper training and socialization, both the Malinois and the GSD can become overly aggressive or protective.

These are not ideal traits in a family pet.

As with any breed, the temperament and aggressiveness of these two dogs depends on a variety of factors, including:

Both dogs were originally bred to be working dogs and are descended from sheep herders.

It makes sense that there is a natural instinct to protect.

Those natural instincts will not go away, but that’s okay. You can improve your odds by carefully picking parents for their friendly natures.

Beyond that what really matters is how the dog is socialized and trained.

Proper training is vital for all breeds, but it’s particularly important for the German Shepherd and Belgian Malinois.

Dogs should be trained and socialized from a young age for best results.

The Belgian Malinois is typically a bit easier to train than the German Shepherd.

Both dogs are highly intelligent, but the Malinois tends to be more enthusiastically involved in training activities.

With that said, the German Shepherd can also be trained to do almost anything.

Do not punish your dog or practice the outdated theory of dominance training.

While the concept of the “alpha wolf” certainly exists in nature, dog dominance is a poorly understood concept in the modern age.

It is not beneficial to try to dominate your dog or punish him for bad behavior.

In many cases, this can backfire, particularly with potentially aggressive breeds.

To train your Malinois or GSD, the key is to start early and train often.

Use positive reinforcement training—giving treats and verbal praise—to create a sense of trust and enjoyment for your pup.

You want your dog to be excited to learn. These breeds are naturally eager to please, if treated well.

Socialization is also vital for these breeds.

Both can be hesitant to meet new people and dogs. However, they are friendly and outgoing if they are socialized from a young age.

In terms of intelligence, the Belgian Malinois compared to German Shepherd are quite similar.

Both dogs are considered very intelligent.

It’s no surprise, given that these breeds are popular choices for professional working dogs.

GSDs in particular are commonly tasked with doing police and military work, drug sniffing, and being seeing eye dog roles.

Both dogs are intelligent and good at problem-solving.

Some claim that GSDs are more intelligent than the Malinois, but canine intelligence is a difficult trait to measure definitively.

What is a definite truth for both breeds is that proper, early training is required to capitalize on these breeds’ intelligence.

So, who is the winner when it comes to Belgian Malinois vs German Shepherd health?

When choosing a breed, it’s always important to be aware of potential health problems that your dog may face.

Here are the most common issues for these two breeds.

Perianal fistula, a disease marked by draining sores around the anus, is most common in German Shepherds.

It can cause painful defecation, bloody stools, etc.

The good news is that in clinical trials, the condition has been successfully regulated via a strict diet of potatoes and fish.

Megaesophagus, a condition involving a limp esophagus that leads to swallowing difficulty, is relatively common in GSDs.

Affected dogs show signs (vomiting) as they are weaned onto a solid diet.

This is a lifelong condition but can be regulated via a liquid diet.

Hip dysplasia, a common and painful hip disorder, is common among many breeds, including German Shepherds.

Being a genetic disorder, this condition can usually be tested for.

Hip and elbow dysplasia, a group of painful genetic disorders, is commonly found in the Belgian Malinois.

Eye issues, including progressive retinal atrophy and cataracts, are observed in this breed.

Other health problems are =possible in either breed, but these are the most common issues reported by owners.

Belgian Malinois vs German Shepherd: Which Is the Best Pet for Me?

So, what will it be, a Belgian Malinois or German Shepherd?

Ultimately, you’re the only one who can make that decision.

We hope that we have given you the resources and knowledge necessary to make the right choice for you.

When comparing the Belgian Malinois dog vs German Shepherd, consider the pros and cons of each breed.

For example, GSDs shed more and have certain health problems, while the Malinois is more aggressive and energetic.

Consider your lifestyle. Review the factors that are most important for you, and choose wisely.

And lastly, rest easy knowing this.

As long as you do the following, you’ll have a fantastic pet:

Once you make your decision, leave a comment. We’d love to hear which one you chose!

Peterson, M.R., et al., 2008, “A Study of the Lifetime Occurrence of Neoplasia and Breed Differences in a Cohort of German Shepherd Dogs and Belgian Malinois Military Working Dogs that Died in 1992,” Journal of Veterinary Internal Medicine

Urfer, S.R., 2011, “Age-Related Cataract in Dogs: A Biomarker for Life Span and Its Relation to Body Size,” American Aging Association