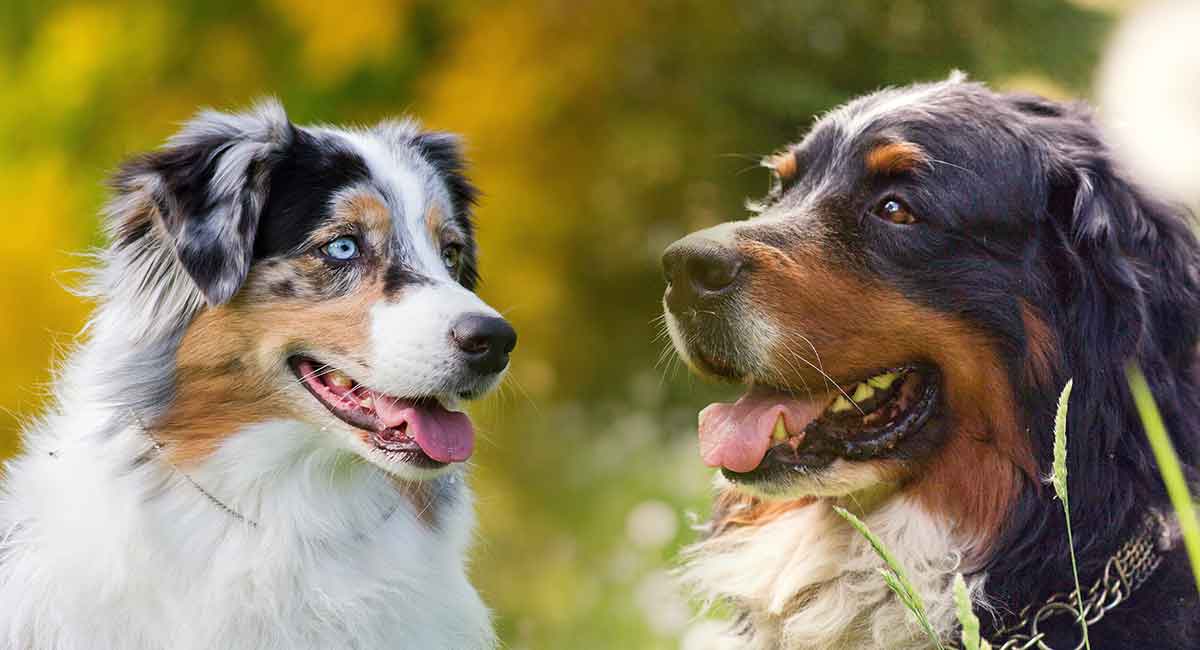 But the Australian Shepherd and Bernese Mountain Dog were bred for very different jobs in very different conditions, so their mixed breed puppies are highly unpredictable in looks and temperament.

If you value a dog with a great work ethic, smarts, loyalty and fabulous hair, then you might be interested in this cross breed.

We’ll look at health, temperament, and looks as well as what kind of home would suit them best.

Where Does The Australian Shepherd Bernese Mountain Dog Mix Come From?

As with most mixes, the exact origins of this cross breed are not known.

But we do know plenty about the parent breeds. Let’s start with the Aussie.

For starters, the Australian Shepherd was developed in America. The West Coast, to be exact!

In addition, dogs from Basque country (on the border of France and Spain), along with dogs from Germany and Australia, came together to create this breed.

Many in the Aussie community were not too concerned with registering the breed with the AKC. They felt the emphasis would shift from breeding working dogs to showing dogs.

However, in 1993 the breed was recognized by the AKC.

The Bernese Mountain Dog has a longer history. In fact, fossils dating back to 3000 BC are likely very early examples of these dogs.

The Berner today originated in Switzerland, from an area called Bern. Research indicates they descend from Mastiff dogs brought from Rome, mixed with dogs local to the area.

They were very popular in the 18th and 19th century as general farm dogs.
Their size, loyalty, and sturdy build along with calm, gentle nature meant they were great as both companions and watchdogs. They pulled carts and accompanied cows to pasture.

These days, they are family pets, while also suited to work as therapy dogs and watch dogs.

While many love the results of mixing two unique breeds, debate rages about whether dog breeds should be crossed.

Some are concerned that mixing breeds will erode the qualities unique to each breed.

They also state that responsibly bred purebreds can be traced back for generations. This means that health, temperament, and appearance are all predictable.

They are also concerned that the popularity of many mixed breeds, or designer dogs, has led to the rise of puppy farms. In these conditions, dogs are kept in unsafe, unnatural, and unsanitary conditions in the pursuit of producing huge amounts of puppies.

However, those who advocate for mixed breeds have concerns of their own.

When too much emphasis is put on the appearance of the dog, little or no heed is given to the health of the animal in the long-term.

Dogs with conditions such as dwarfism, flat faces, and long backs are bred deliberately, leaving dogs to face a life of pain, injury, and at times premature death in the pursuit of a “standard.”

Some studies also indicate that introducing new genes into the sometimes very limited gene pool of purebred dogs is beneficial to the health and vitality of these dogs.

Sarah Michelle Gellar, teen sensation of the 90’s and early 00’s, is a fan of Berners, having had one herself until recently.

When her dog Bella passed away, she was full of praise for the breed.

As a testament to their smarts, Australian Shepherds made a name for themselves as actors in silent movies.

Cowboy movie star Jack Hoxie’s sidekick was a dog named Bunk. They starred together in several films and Bunk also worked with Hoxie on the Rodeo circuit.

The Aussie Bernese mix is a combination of the features of its parent breeds.

While it is impossible to say exactly which qualities will be passed down, we can look at each parent individually to get some idea of what combinations may occur.

As a working dog, it is most important that they are agile and well-proportioned. Thus they can carry out their work with speed and comfort.

They have a beautiful array of colors:

They may also have white markings and/or tan (copper) points.

They have a medium length coat which can be straight or wavy. Their undercoat varies in length according to their living conditions.

Their eyes may be of different colors. Piercing pale blue eyes are a distinctive aspect of the breed.

They are a sturdy dog, slightly longer than they are tall. Although a heavier dog, they are still agile.

Like the Aussie, their coat is medium in length. It can be wavy or straight. Tri-colored, they are predominantly black with rust and white markings on the chest, face, feet and tail.

It is impossible to predict what a mix of these dogs would look like. But it will likely be a medium to large dog with a medium length coat and varied markings.

Neither of these breeds are known to have problems with aggression. However, according to some studies, the Australian Shepherd may be slightly more aggressive toward other dogs than the Bernese.

Australian Shepherds are known to be very loyal to their family, easily trained and keen to work.

Some Aussies can be shy around strangers and become protective of their family. This must be kept in mind when training them. Attention should be paid to socialization when they are young.

They also have tendencies to guard and herd. They are, after all, working dogs. If Aussies are kept busy and have lots of interaction and training with their owner, however, they are happy as a companion dog.

The Bernese has some similar personality traits to the Aussie. In general, though, they are a more laid-back dog. While still possessing the work ethic, eagerness to learn, and loyalty of a working dog, they are placid and gentle.

They can be a little shy with strangers. A mix of these breeds is likely to be loyal to their family, loving nothing more than spending time with them working or playing.

Loyalty to their family, while a nice quality, should be kept in check so it doesn’t become an issue when your friends pop over for a visit. Training and socialization will require time.

Socialization plays a large role in ensuring a friendly dog, especially when your dog could grow quite large and energetic. Bear in mind that some dogs will always be more reserved around strangers.

Your Aussie Bernie mix will likely be a fairly active dog, and need time each day to run and play. He will also benefit greatly from having tasks to do.

Thanks to the focus on the breed’s ability to work, the Aussie has generally good health. They usually live up to 15 years of age. Like most breeds, they are susceptible to certain genetic conditions, such as:

The Bernese Mountain dog has a significantly shorter lifespan, about 7 or 8 years. Diseases which commonly afflict Berners are:

For more information about Berner health, visit the Berner-Garde Foundation.

While the two breeds share some broad health concerns in common, such as allergies and cancers, the specific types that seem to affect each breed are different.

Other issues such as cataracts and elbow and hip dysplasia are shared, so a mix has a higher chance of inheriting these problems.

It is important that the health of both parents is screened. A mixed breed pup could inherit health conditions from either parent.

As both breeds have a longer coat, some time will need to be invested in maintaining it.

Some special attention may also need to be paid to diet if your dog proves to be sensitive to certain ingredients.

Do you have time, space, and money to cater for a large dog with flowing locks, lots of brains and energy? Then these dogs are great family pets.

If you are short on time to spend with these dogs each day, or are not experienced with dogs, they aren’t the best dog to start with.

Many who rescued a dog say that the dog seems eternally grateful.

By rehoming an older dog, you have a clearer idea of temperament and health.

Many rescue dogs were well raised by owners who gave them up for reasons beyond their control. Others suffered terrible abuse in their former lives, or have health conditions the previous owner could not deal with or afford to treat.

Have an honest discussion with the rescue organization to ensure you are matched with the best dog for you.

We have already touched on puppy mills – establishments where puppies are bred and sold in bulk, kept in horrible conditions, and not allowed time to bond with their canine family before they are whisked away.

Sadly, the growing popularity of mixes means that some people try to cash in by breeding dogs this way.

When looking for any puppy, avoid pet stores or buying a puppy online without visiting the premises on which the puppy was born and raised.

Are you are interested in rescuing one of these dogs? Here is a list of organizations that might be able to help you out. If you know of any others, let us know in the comments section below.

Is An Australian Shepherd Bernese Mountain Dog Mix Right For Me?

These dogs make great companions for those who have the time and space to care for them.

Also, keep in mind that regular grooming and a decent sized budget for a good quality diet will be required.

If you think you can provide this kind of a home for an Australian Shepherd Bernese Mountain Dog mix, then perhaps you have found the perfect addition to your family!