You are here: Home / Breeds / Brindle Pitbull Facts – 30 Things You Never Knew About Your Favorite Dog 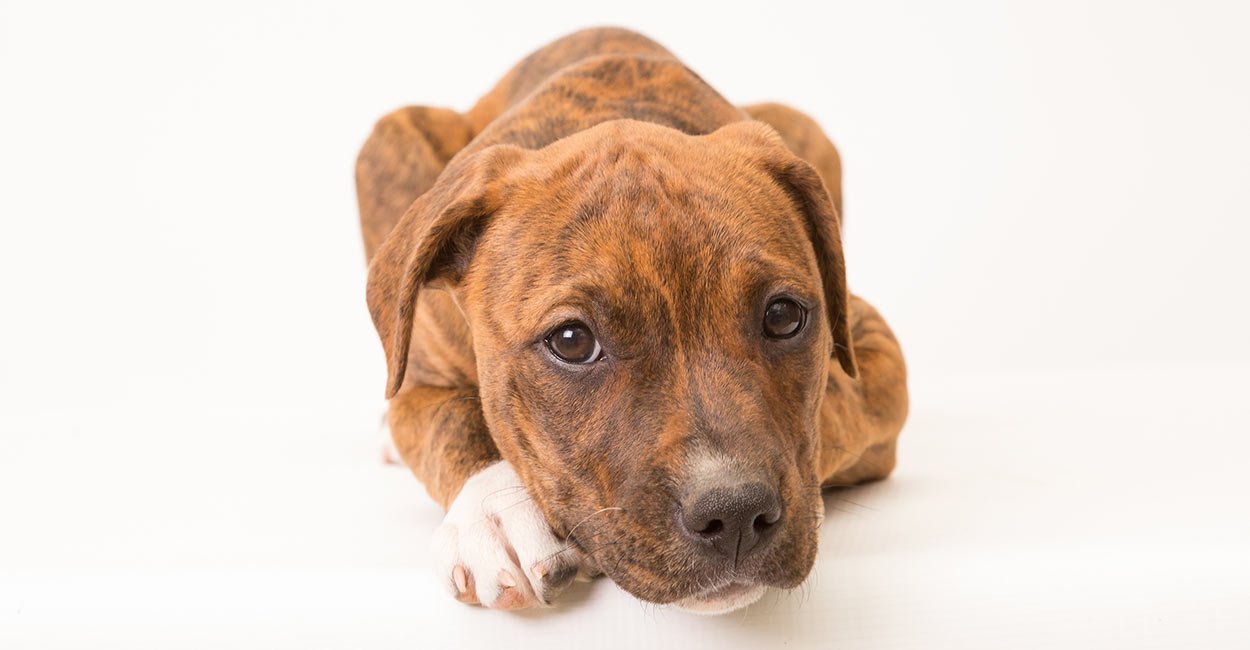 From behavior to temperament, and even those gorgeous celebrity brindle Pits.

You’ll find facts to fascinate any Pittie enthusiast. Or to help you decide whether this pretty pup is the right pet for you .

With so many canines out there, it can be really difficult to figure out which one to adopt.

One of the best ways to make your decision is to look at the facts, and we are here to help you learn a little bit more about the Brindle Pitbull.

So, get ready for 30 awesome Pitbull facts.

Bud, one of the most famous Pitbulls, is known for his unique eyewear.

The goggles, which now reside in the Smithsonian museum, were worn during a historic car ride from San Francisco to New York City.

The long trip has been called the first ever road trip, and Bud enjoyed his adventure with his owner, Sewall K. Crocker.

Cocker was the assistant to Dr. Horatio Nelson Jackson who was the driver of the Winston Vermont vehicle.

If you want to know more about Jackson, Crocker, and Bud, PBS created a documentary about the first every American road trip.

2. A Brindle Pitbull was the most decorated canine ever

A Brindle Pitbull Terrier named Stubby is perhaps one of the most decorated canines of all time.

This pooch served as the mascot for the 102nd infantry during World War II.

However, Stubby was not just your average mascot. He was raised to Sergeant status after he famously attacked a German spy.

The spy was later captured by the American infantrymen, thanks to Stubby.

While the exact heritage of Stubby is unknown, he is believed to be a brindle Pitbull Terrier mix.

3. Brindle Pitbulls were bred for other characteristics

Brindle Pitbulls were not bred for their color, so the brindle coloring was simply the consequence of breeding the different dogs. 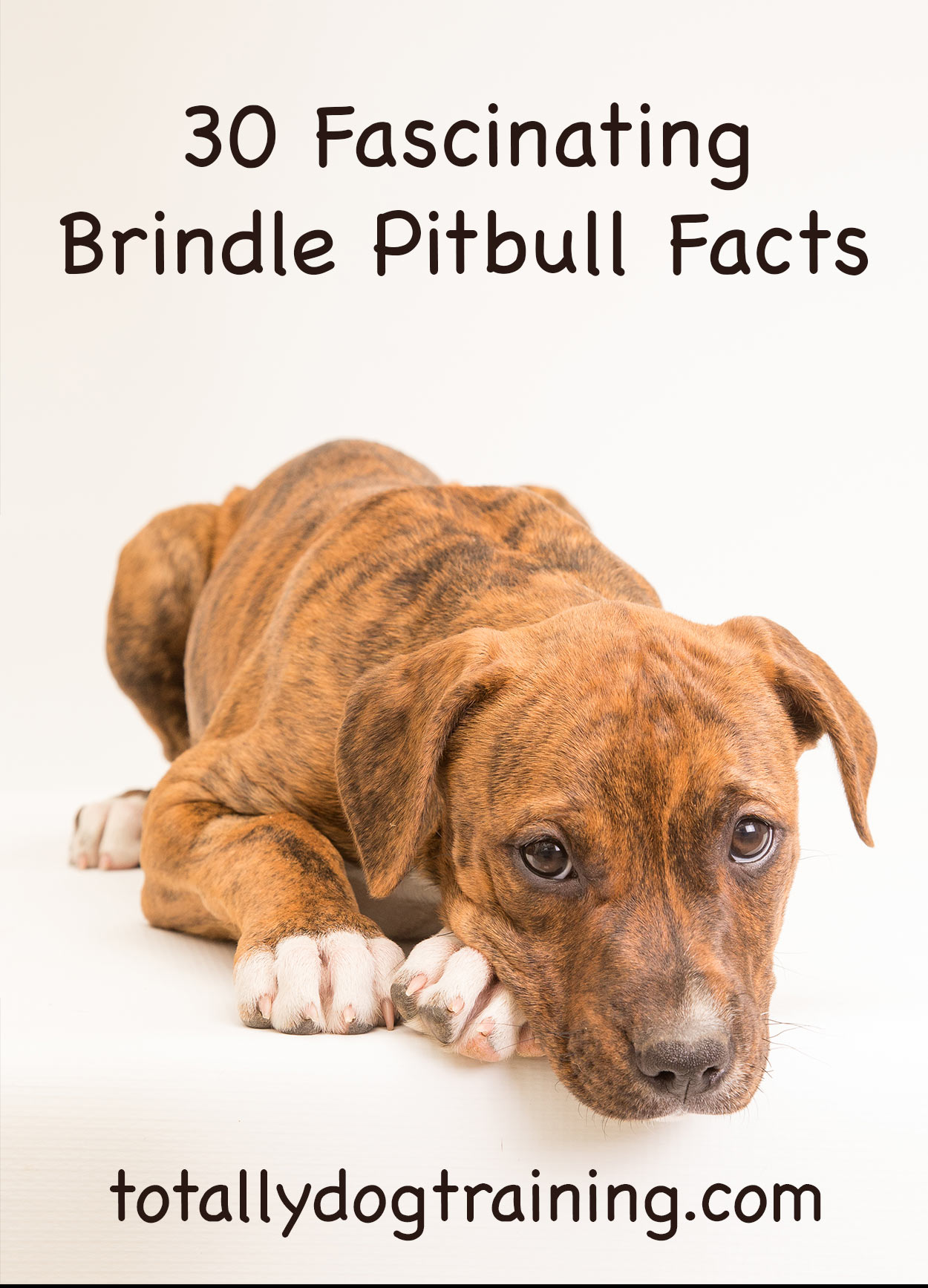 They were instead bred for their strength, athleticism, and intelligence.

4. Brindle is a unique color

Contrary to popular belief, brindle hair color does not occur when black and fawn Pitbulls breed.

Brindle is its own color variation. In general, a specific gene called the K locus is responsible for coat color, according to research.

This means that while black Pitbulls are the most common, brindle comes in as the second most likely color to be seen in Pitbulls.

However, a brindle and fawn pairing has a 50% chance of producing a brindle colored puppy.

6. Brindle Pitbulls have been around a long time

The brindle coloring of the Pitbull is about as old as the breed itself.

The coloring was first noted when fawn and brindle canines were bred.

This can be traced back to the 19th century when the first bulldogs were bred with terriers to create the brindle Pitbull mix.

When choosing a brindle Pitbull puppy, you should know that you are probably looking for an American Pitbull Terrier.

The term Pitbull refers to the Pitbull group, which consists of three dogs that have very similar physical attributes.

8. The Little Rascals Pitbull was Brindle and White

When it comes to dogs on television, none are more recognizable than Petey from The Little Rascals.

Petey was a white Pitbull with some brindle coloring, and his real name happened to be Pal, according to his owner and trainer, Harry Lucency.

Petey’s telltale black ring was quite pronounced on television, but the ring is far from a natural attribute.

It was created with makeup applied to the face, and you can often see the ring changing from the left to the right eye, depending on which episode you watch.

9. Brindle Pitbulls Originated in the UK

The American Pitbull Terrier did not actually originate in the United States. It originated in Ireland, Scotland, and England. 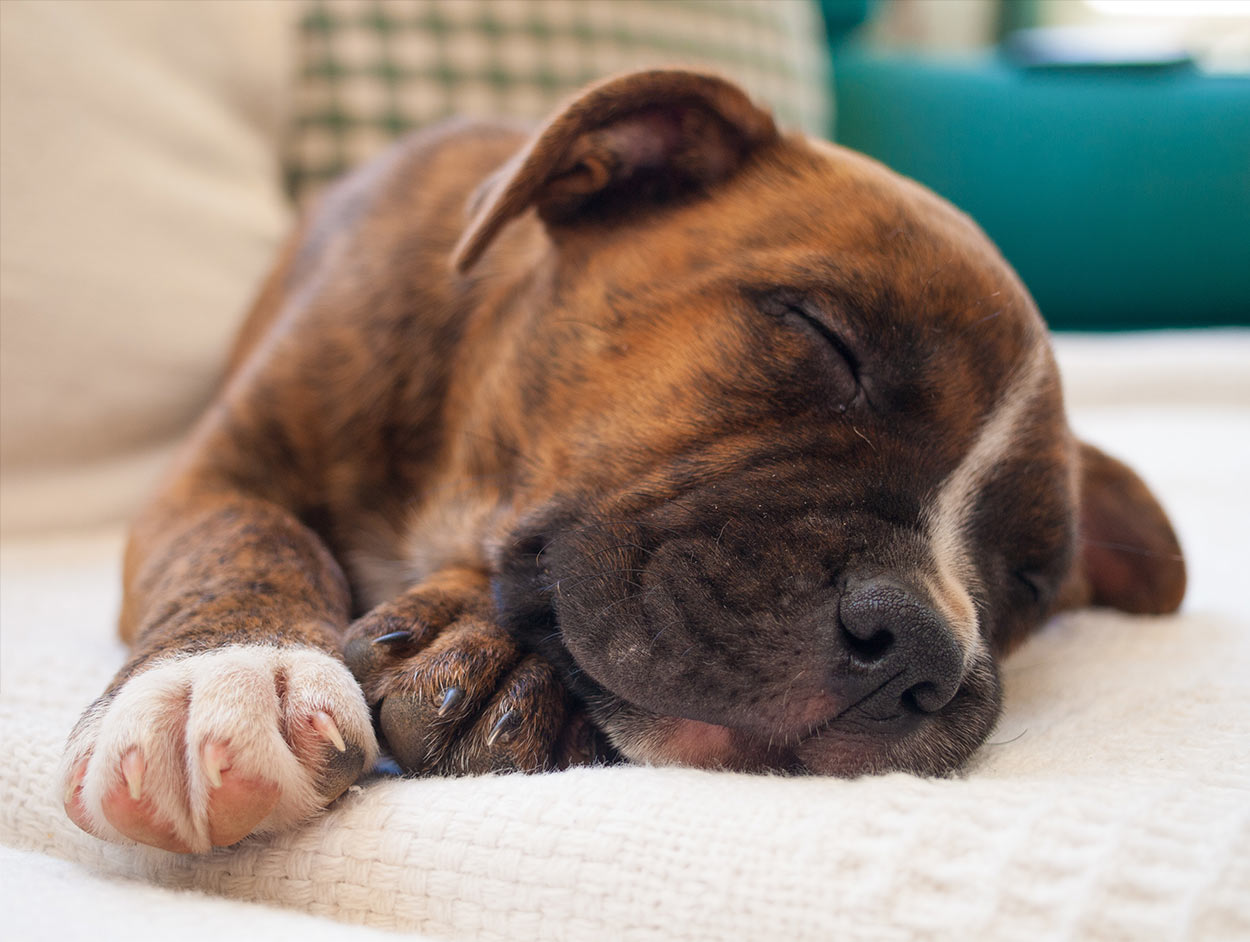 While the dogs were used as fighters in Europe, the canines primarily became companions and working dogs once they were brought to The United States by immigrants.

10. The Brindle Dog From Parks and Recs is really a rescue!

The three-legged white and brindle colored dog featured on the television show Parks and Recreation is a rescue dog, just like the canine she plays on the program.

The dog’s name is Lucy and came from a rescue organization, but nobody knows how she lost her leg. Lucy is quite spry though, so she probably lost the limb early in life.

Although first generation crosses can be controversial, there are several popular variations amongst the Pitbull population.

Labrador, Husky and German Shepherd mixes are some of the main ones.

12. Pitbulls aren’t the most aggressive breed

According to the American Veterinary Medical Association, toy breeds are the most aggressive of all dogs, and not so-called “bully breeds.”

13. Pitbulls are loyal and protective

Some people think that the Blue Brindle Pit does not like humans. This is untrue.

The dogs are extremely loyal and will protect their families from perceived threats.

This is one reason why the dogs are wonderful watchdogs, but also why they can on occasions show misplaced aggression to visitors to their homes.

It is a myth that the Red Brindle Pitfall has a locking jaw.

Since Terriers were bred to hunt and attack small vermin, they will grip onto small toys, bones, and other objects quite strongly.

This stubborn tenacity is prominent in all Terriers, but there is nothing distinct or dangerous about the Pitbull jaw.

The locking jaw myth probably came from the style of bite Pitbulls have.

They don’t snap like some smaller breeds, but bite and hold onto their target.

This is why they are responsible for lower levels of bites but higher fatalities than some other breeds.

According the the American Temperament Test Society, an overwhelming majority of Pitbulls passed the friendliness test.

Over 900 dogs were tested, and almost 88% of the canines were deemed friendly. 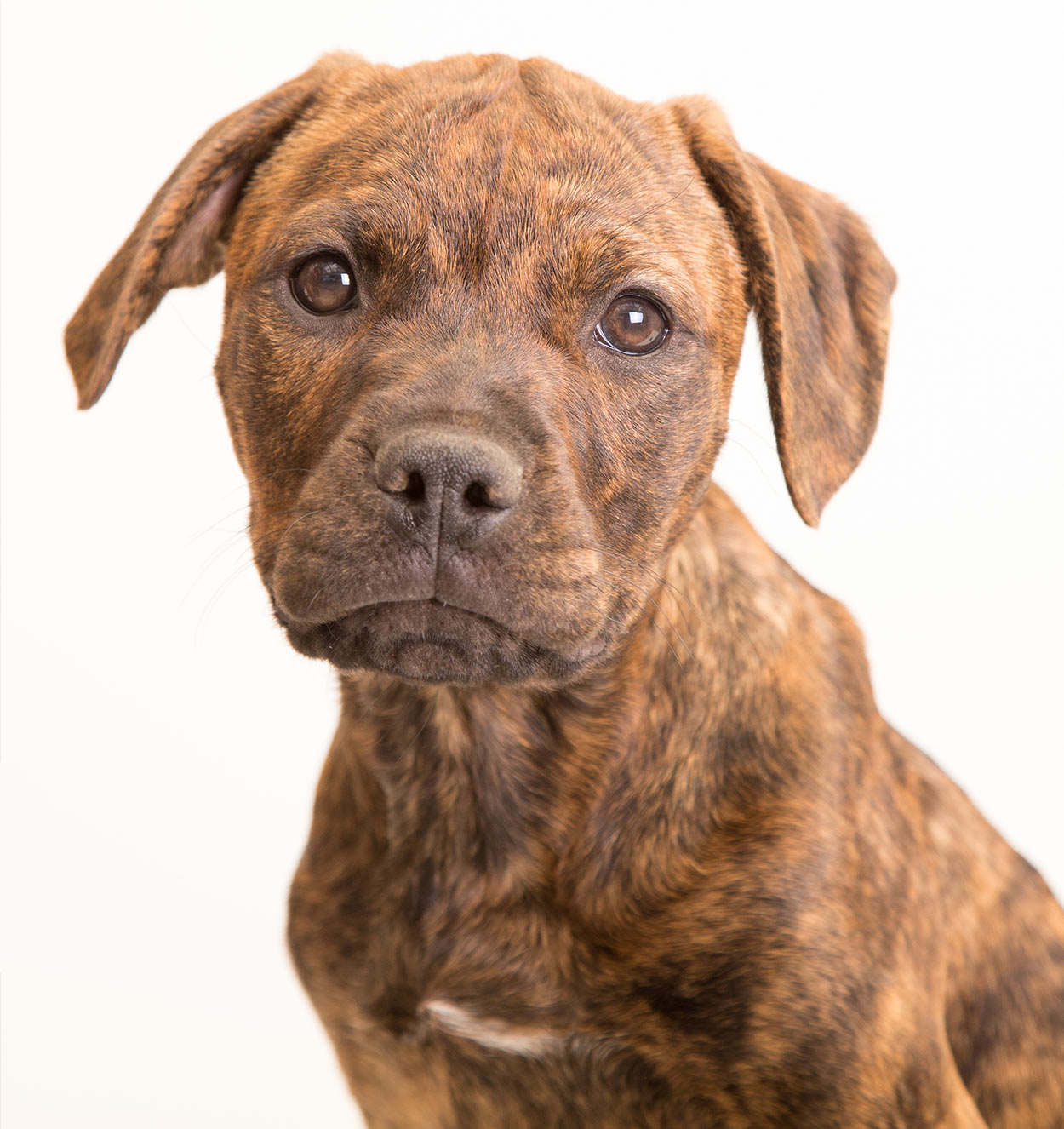 This percentage is actually quite a bit higher than some of the breeds we commonly think of as friendly.

The misunderstanding may come from the dangerous nature of the bite when they do bite, which is more of an issue than the frequency of bites.

Their blue coloring is more of a gray tone and is caused by a recessive gene.

The blue nosed dogs will often have a muted color along the nose that looks gray, and the hair will have ends that lack pigmentation, with middle sections that are black.

Since the blue nose and the unique gray hair color are caused by recessive genes, a smaller gene pool of Pitbulls will often be used to create the dogs.

This can result in some genetic issues, like viral and fungal infections, so inquire about brindle Pitbull health when looking to adopt one of these pups.

18. Brindle Pitbulls can be hard to Identify

According to studies, Pitbulls are mislabeled 60% of the time, even by experienced animal shelter staff.

So, if you are looking for a canine companion, consider speaking with Brindle Pitbull Breeders or bring a friend to an adoption center who knows about the breed.

19. Pitbulls can be social with other dogs

Pitbulls are not always intolerant of other animals.

It is true that many Terriers and other bully breeds were used as fighting dogs.

However, the red brindle Pitbull is no longer bred for its aggressiveness.

Canines with a more gentle temperament are often chosen as breeding dogs, and thus, the personality traits are passed down to their pups.

20. The Brindle Pitbull’s jaw is over estimated

The reverse brindle Pitbull is often said to have a jaw that packs a whopping 1600 pounds per square inch of force.

This is simply not true, and the jaw is more likely to have an average force of about 269 pounds per square inch, according to a National Geographic study, which is far less than the force exerted by a Rottweiler.

Since Pitbulls are often misunderstood, the author Malcolm Gladwell used the canines as a learning tool.

In his essay, Troublemakers, Gladwell explains the stereotype of Pitbulls and how it is similar to the way that individuals racially profile other humans.

The essay helps us to understand how we can all learn to be more accepting of each other as well as the dogs in our lives.

However, we can’t ignore the mortality rates from Pitbull bites when compared with the bites of other breeds.

22. Banning Pitbulls in the US didn’t reduce Dog Bites

Just a few years ago, 700 cities in the United States banned individuals from owning Pitbulls. However, data suggests that the bans did nothing to control dog bites.

However, it’s not the number of bites that is a risk with Pitbulls, but the severity of the injuries they cause.

The blue brindle Pitbull once went through a rebranding campaign in 2004.

New York City Animal Care and Control started the campaign to rename the dogs New Yorkies, as the dogs were thought to have many of the same positive traits as New Yorkers.

The New York campaign was not the only one involving the Pitbull. A group of people in San Francisco also tried to rename the pups St. Francis Terriers in the 1990s.

The red nose brindle Pitbull is owned by many celebrities, including Snoop Dogg, who has owned as many as 20 of the canines at one time.

The prominent photographer, Sophie Garmand, who is known for her shelter dog portraits, commonly uses Pitbulls in her pictures.

Her goal is to change the way that shelter dogs are perceived.

Some Pitbulls are even known for their ability to sing, just ask the fronting members of the band Caninus, which are two female Pitbulls.

If you are worried about Brindle Pitbull price, then seek out a dog from a shelter.

The dogs, even the purebred varieties, can be adopted for a small fee.

There are hundreds of rescues holding them, although remember that in the UK and some US states they are a banned breed.

29. Pitbulls Can Be Rehomed Successfully

The Villalobos Rescue Center, which is featured on the hit television show Pitbulls and Parolees, has singlehandedly placed over 400 dogs.

30. Pitbulls Can Be Very Well Trained

Brindle Pitbull training is easier than some might think.

Zoey is classified as an obedience utility dog and also holds the honor of therapy dog.

As you can see, the brindle Pitbull is an interesting and unique dog.

Whether you love ’em or hate ’em, there is no denying that this is one fascinating breed!

Check out this article on blue nose Pitbulls for even more fun facts!

Best Dog Food For Maltipoo – From Puppies to Seniors
Next Post: Blue Merle Border Collie – Are They Healthy, Happy Pets?