Why Are Retractable Dog Leashes Bad?

You are here: Home / Training / Why Are Retractable Dog Leashes Bad?

You’ve probably overheard that dog trainers prefer static leashes to those that extend. But why are retractable dog leashes bad in some people’s eyes, and okay in others?

The pros and cons of retractable dog leashes are hard for some owners to weigh up.

That’s because they provide something that seems like a good thing.

It feels like your dog has the illusion of freedom, without the fear of getting lost.

Unfortunately, the reality of a retractable dog leash is not so freeing!

Why are retractable dog leashes bad?

I am not a fan of retractable dog leashes, and it comes down to a few different reasons. And they are quite varied:

Retractable leashes can cause hand injuries

This section isn’t for the faint of heart – so if you’re squeamish skip down to the next one!

Hand injuries from retractable leash use

There have been several reports of people suffering horrific hand injuries, after their retractable leashes become wrapped around their fingers.

In a process known uncomfortably as ‘degloving’ the skin is ripped off when the dog suddenly moves.

Lots of people get away with a nasty friction burn, but even that is much better avoided.

The temptation to wind the cord around your finger, due to the thin nature of them, makes injuries like this much more likely than with a standard short leash.

Eye injuries from retractable leash use

It’s not just the hands of dog owners that use retractable leashes that are at risk. It’s their eyesight too!

Scarily, there have been reported incidences of retractable leashes snapping at a distance and automatically retracting, causing the dog’s clip to be thrown at great force into the owner’s eye!

While this seems like a freak occurrence, reports are not seemingly a one-off.

Although this can be avoided by use of eye protection or a secondary clip, most owners will not use either of those in conjunction with their retractable leashes.

And it’s not just the owners at risk from them.

When you have a dog on a retractable leash, you feel that they are safe from harm.

But in fact, retractable leashes have been known to fail when fully extended. Especially when attached by a collar.

This means that a dog that has learned it can do as it pleases with the leash off, is now out in the world leash free.

Where he is able to run into whatever trouble might be waiting just around the corner.

Many users of retractable leashes rely on them because their dog’s recall is poor. But there is no substitute for a great recall in this scenario.

Although it doesn’t always lead to injury, another downside is the probability of getting tangled.

Both you and your dog, but also other people, are at risk when the leash is extended. 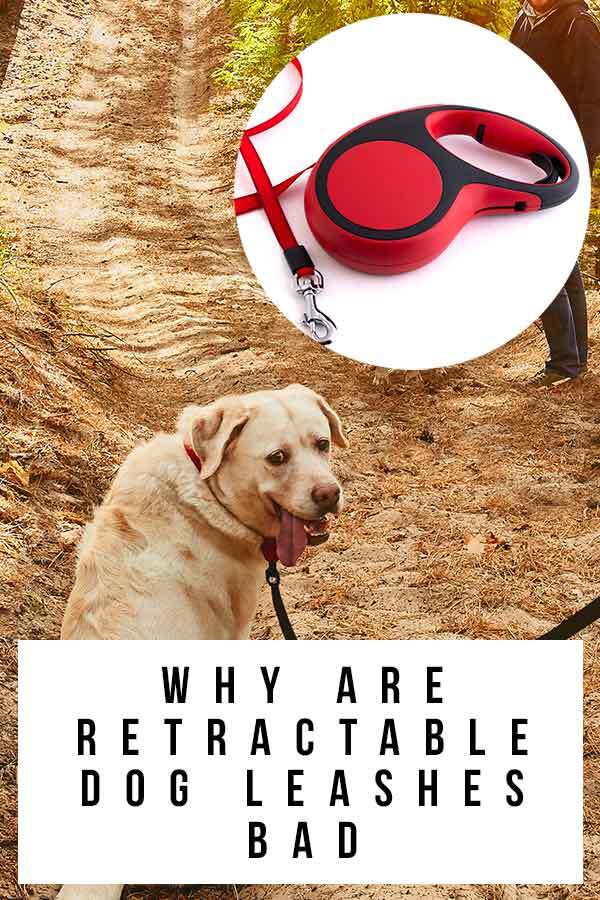 As it remains taught, it is held high in the air and at best presents a real trip hazard. And worst, it wraps around the person or dog that your pet has just whizzed past.

So that summarises the issues with safety and retractable leashes, but why are retractable dog leashes bad for training?

Teach the dog to pull

A retractable leash is the very opposite of a good thing when it comes to getting your dog to walk nicely next to you.

Because it rewards your dog for pulling.

Every time they pull, they get to go investigate a new thing! Or meet a new friend! Or sniff a new smell!

Except this isn’t such a big cause for celebration if what you want is your dog to stay in your company sometimes.

Like when you are walking along next to a busy road, for example.

There are several reasons retractable leashes are bad for a dog’s recall too.

Firstly, they provide a band aid to the problem of bad recall and an illusion of safety.

This makes the owner less likely to put in the effort required to sort out their pet’s recall problems.

And encourages them to go to places which aren’t secure to let their dog have a run around.

But it also doesn’t work as a tool for during training.

Because a retractable leash can’t replace a long line.

Sometimes an owner will want to use a retractable leash in place of having a short and long line, which they have seen suggested as training tools.

They think it would be ideal. Just one purchase, and no need to swap back and forth.

When on a short length a retractable leash could hypothetically do the same job as a standard short leash.

Provided that you never used the release button, which, let’s face it, would make this function rather redundant.

But even if you did that, the issue of swapping purposes will quickly cause you problems.

As unfortunately, the nature of the way that a retractable leash is used means that it can never be a substitute for a long line.

A long line is the dog training tool you hope you never have to use.

And it’s function depends upon your dog not realising that it has one.

The long line is attached to a harness when you are training the dog in a safe, enclosed area.

You don’t want to use it as a preventative when there are temptations around like other dogs, or wildlife.

Because in order to give your dog the true illusion of freedom, they have to not know that you can stop them running away if you want to.

We teach them to make good choices through rewards, not barriers.

Why are retractable dog leashes bad?

Ultimately it’s a combination of potential for physical harm to the dog and owner, and because of the negative impact using them will have on your training efforts.

For dog training and obedience success, invest in a nice short leash and a long line, to use in conjunction with your dog’s harness.

You won’t regret it!

How To Stop My Puppy Jumping Up And Nipping
Next Post: Can Dogs Eat Honeydew Melon?