Fat Puppies – How Chubby Is Too Chubby? Here’s The Skinny

You are here: Home / Health / Fat Puppies – How Chubby Is Too Chubby? Here’s The Skinny 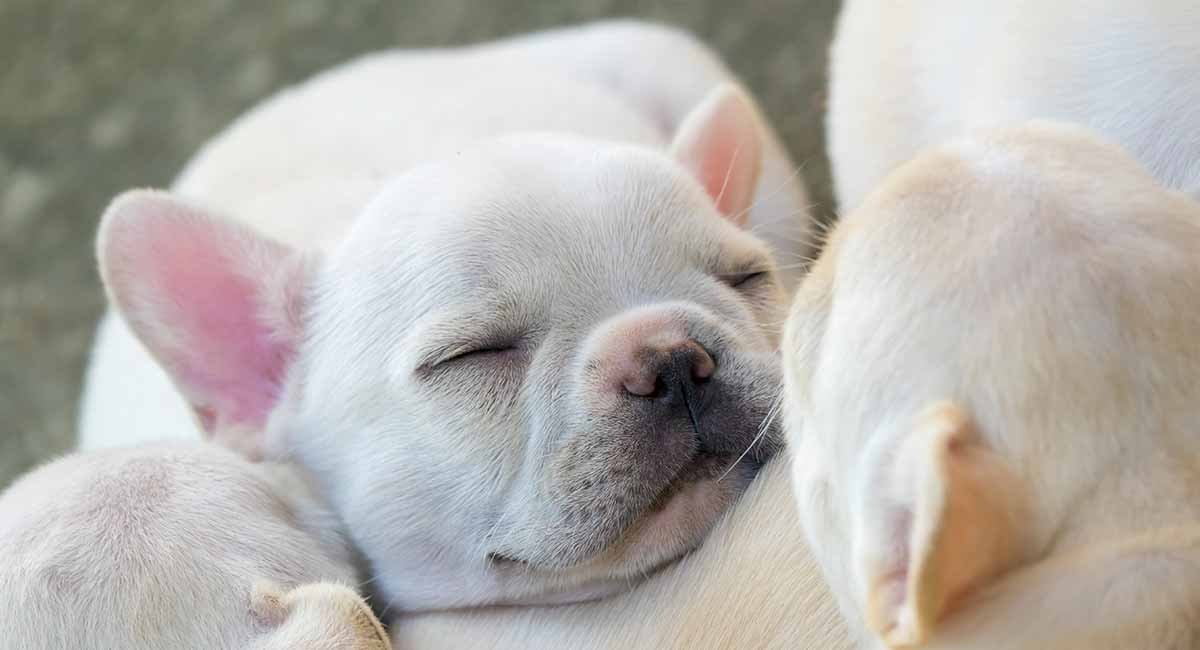 Fat puppies weighing you down?

It should be no surprise that just like people, puppies who eat more calories than they burn off are going to put on weight.

Although a pudgy little pup can be extra cute, it can lead to numerous health problems.

In this article we’ll look at how to determine if your puppy is fat and the health risks associated with being overweight.

We’ll also show you how to help your fat puppy shed those unwanted pounds in the healthiest way possible.

Do Puppies Get Fat Easily?

A puppy is generally defined as being younger than one year of age. However, different breeds develop at a different pace.

Larger dogs take longer to reach their adult weight than smaller ones. The rate of growth during their first year isn’t consistent either.

According to this study, energy requirements decrease considerably from the time they’re weaned until they approach adulthood.

This is why it’s important to feed your pet with food that’s appropriate for his age and breed size. Unfortunately, dogs today often don’t get enough exercise.

Compound this with too many high-calorie dog treats and people food, and it’s not hard to see why obesity is the most common medical condition in dogs.

Are Puppies Prone to Being Overweight?

In fact, this 2017 U.S. study done by the Association for Pet Obesity Prevention (APOP) found 56% of all dogs surveyed to be clinically overweight.

Generally speaking older dogs are more likely to gain weight than puppies, but there are certain breeds who are predisposed to obesity.

Which Breeds are Prone to Weight Gain?

The reason some breeds are more likely to gain weight than others is largely due to genetics.

A dog is considered to be obese when they weigh 20% more than the breed average.

Sadly, many of our favorite dog breeds are prone to genetic obesity.

The Dachshund, with his short legs and long back, is susceptible to intervertebral disc disease (IVDD) as well as obesity.

This study found that they’re 10 to 12 times more likely to suffer from IVDD than other breeds.

As many as 24% of all Dachshunds show signs of this debilitating condition.

When a Dachshund carries excess weight they’re also at a higher risk for back problems.

So keeping them fit and feeding them enough is vital.

The English Bulldog is susceptible to a long list of health issues due to his body conformation.

What’s even worse, is that since they are a brachycephalic breed and prone to breathing trouble, they’re unable to do much exercising at all.

This makes it even more difficult for them to lose weight.

Since Chihuahuas are so small even an extra pound can make a difference.

To put it in perspective, if your Chi puppy weighs 4 pounds and they gain one pound it’s like you gaining 25% more body weight.

Another problem is that these little dogs often get toted around rather than exercised.

Human food can also cause problems for their tiny digestive systems which weren’t designed to process it.

Both the Labrador Retriever and the Golden Retriever are also genetically prone to obesity.

Is My Puppy Fat?

Your breeder or veterinarian will be able to give you a range of what your puppy should weigh based on their age and breed.

However, putting him on the scale isn’t the only way, or even the best way, to determine if your puppy is fat.

Ideally, when you put your hands on either side of his ribcage and apply gentle pressure you should be able to feel his ribs. However, the ribs shouldn’t be clearly visible as this is often a sign of being underweight.

Your puppy should have an indented waist between the ribs and hips. This is easiest to detect if you look at him from above. You can also check that his waist tucks in when viewed from the side.

Make Sure To Check Your Pup

If you can’t feel his ribs or see a waistline that’s slimmer than their hips, then there’s a good chance that your puppy is overweight.

At this point a trip to the vet is in order.

This is to rule out any underlying health problems and also to have them checked out before changing their diet or exercise regimen.

How Spaying and Neutering Affects Your Puppy’s Weight

Most people choose to have their puppy spayed or neutered to avoid unwanted litters and aggressive behavior. It has also been shown to decrease the risk of certain cancers.

However, spaying and neutering can also cause weight gain in your puppy.

This study found neutered males and spayed females to have the highest prevalence of being overweight and obese.

Unless their food is decreased and their exercise increased after the operation, they’re likely to gain weight as an adult.

As you know by now, being overweight isn’t good for anyone, not even puppies.

However, it’s important to fully understand just how detrimental carrying extra pounds can be for your pet.

Even moderately overweight dogs are at greater risk for a shortened lifespan.

Hip dysplasia is an abnormal formation of the hip socket. It can cause lameness and is the leading cause of arthritis of the hips in dogs.

This crippling condition is very common, especially for larger breeds.

This study found that hip dysplasia occurred more often, more severely, and at a younger age, in dogs who had a rapid weight gain.

In addition to putting stress on their musculo-skeletal system, extra pounds can cause or exasperate numerous serious health conditions. This includes diabetes, heart disease, urinary and reproductive disorders, respiratory disease, skin disorders, and some cancers.

As noted, it’s important to take your puppy to the vet before changing his diet.

Your puppy is not going to be happy about it, but those tasty treats will need to be eliminated.

You may not realize just how quickly the calories add up in processed dog treats.

This also means they shouldn’t get table scraps and other forms of people food.

Make sure everyone in your family understands how important it is that your puppy loses weight for his health and well-being.

Since you’re probably in the process of training your puppy and using treats as rewards, it means finding a healthier, lower calorie option.

When you make your own homemade dog treats it allows you to control the ingredients.

Start giving your puppy less food at each meal. For four days in a row he should get a third less food than he was getting.

For example, if he was eating one cup of food twice a day, reduce the amount to two-thirds of a cup for each meal.

After four days, check if he’s lost weight by seeing if you can feel his ribs.

If there’s no notable difference, repeat the process for another three to four days and then check him again.

Repeat until you can see his waist and feel his rib cage when pressing along his sides.

At this point your puppy should have lost some weight. You may even need to increase his food so that he doesn’t become underweight.

On the other hand, if he hasn’t lost any weight, you may need to reduce his calorie intake even further.

However, it’s recommended to check with your vet before doing so.

Although food intake will make the greatest difference in your puppy’s weight, increasing the amount they exercise can also help them lose excess pounds.

This study found that each hour of weekly exercise decreased the odds of obesity.

Extra walks and play time will not only help your dog keep fit and active, it’s also a good way to bond with your puppy.

However, strenuous exercise is not for every breed.

This is especially important if your puppy is brachycephalic.

Having a flat face is often the source of serious breathing problems.

For this reason, these dogs must never be over-exercised.

We’ve seen a major reason for puppies becoming overweight is too much food.

So, you might want to take a look at some of our feeding guides if you’re looking for advice about how to avoid an overweight puppy.

Caring for a Fat Puppy

The best way you can care for your fat puppy is to help him lose weight. This should occur in a safe, gradual way.

Always have your puppy checked out by your veterinarian before drastically changing his diet.

There could be underlying reasons for weight gain.

It may be really difficult for you to eliminate his beloved treats, but remember you’re doing it for his own good.

You’ll Have A Healthier Puppy

Weight loss can decrease your puppy’s risk of numerous diseases including:

Adding additional exercise to his daily routine can also melt away unwanted pounds.

Helping him lose weight while he’s still young and active will be much easier than when he’s an adult dog.

Do you have a fat puppy? Tell us about their weight loss journey in the comments below.

Flanagan, J., et al., “Success of a Weight Loss Plan for Overweight Dogs: The Results of an International Weight Loss Study,” PLOS One, 2017

Packer RMA, et al., “DachsLife 2015: an investigation of lifestyle associations with the risk of intervertebral disc disease in Dachshunds,”  Canine Genetics and Epidemiology, 2016

German, AJ, “The Growing Problem of Obesity in Dogs and Cats3,” Journal of Nutrition, 2006

15 Fluffy Dogs to Steal Your Heart and Make You Smile
Next Post: Blue Merle Australian Shepherd: The Secret Behind the Pattern