Why Do Dogs Jump On You? Scientific Study Throws New Light On This Common Problem

You are here: Home / Dog Science / Why Do Dogs Jump On You? Scientific Study Throws New Light On This Common Problem 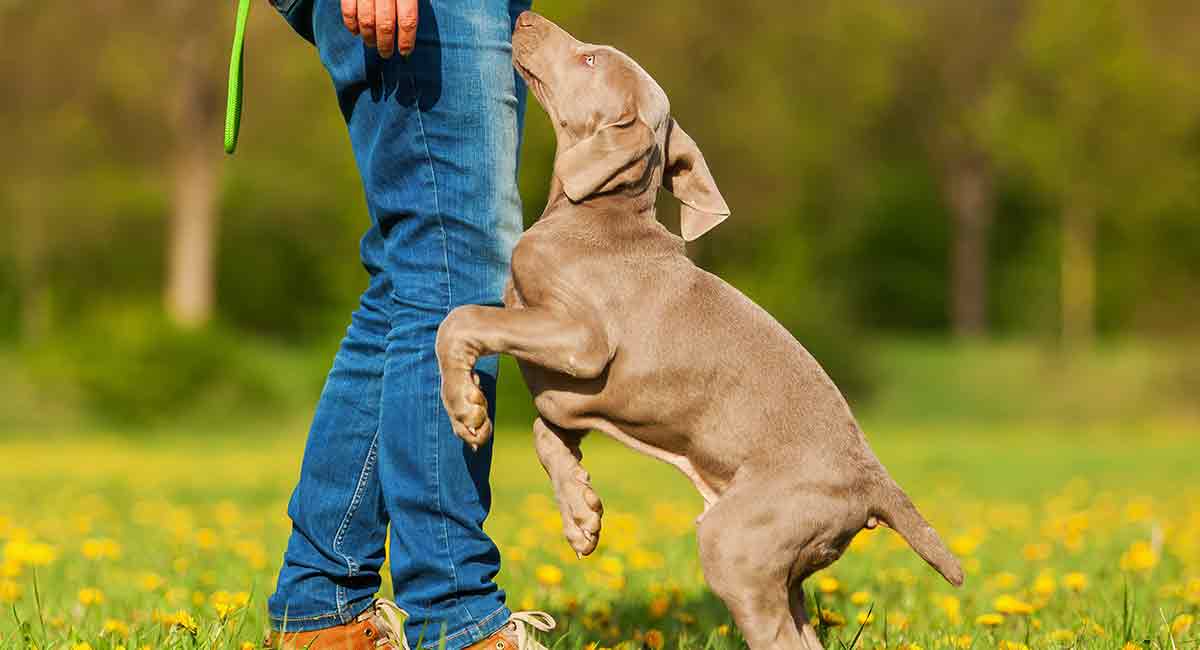 Have you ever wondered about this phenomenon? Why do dogs jump on you?

About 90 percent of dogs jump on people during some period of their life.

So, researchers thought it was time to study why this behavior happens, and what affects the frequency of dogs jumping on people.

What they found is that whether or not a dog jumps on you depends on various factors.

Your body position, the context of the encounter, the dog’s size, and whether or not the dog has been neutered or spayed.

Let’s look at the research in more detail and find out more!

Furthering the Research on Why Dogs Jump on You

Until now, we haven’t known a whole lot about why dogs jump on people.

Previous studies have mostly focused on how often dogs do it, compared with other problematic dog behaviors.

But scientists at Mendel University in the Czech Republic decided to go a bit further with the research to find out more about dog jumping.

Specifically, they wished to look at context.

They wanted to see what kinds of behaviors were associated with dogs who jumped on their owners in two different contexts.

The researchers found dogs that met certain qualifications to participate in the study.

They had to be separated from the litter at two months, and had to still be living with their original owner.

The dogs also had to be at least one year old.

This helped to eliminate any behavioral issues that might arise from early weaning or traumatic separation experiences.

They used purebred and mixed breed dogs, big and small, male and female, neutered and not neutered, with an age range of 1-16 years.

In the end, 48 dogs participated. The scientists sent out a questionnaire to get the information.

Four experimental episodes were studied with all combinations of two body positions and two contexts.

The contexts were: immediately after an owner entered the house, and while the owner was holding a bowl in the place where the dog is fed. The positions were crouched and standing.

Then the scientists looked at a number of different canine behaviors under these circumstances.

The behaviors included jumping on the owner, tail wagging, running in excitement, licking the owner’s face, holding the ears back, and wagging the hindquarters.

The Results of the Study

The scientists came to a number of interesting conclusions.

For one thing, they found that dogs were 13 times less likely to jump on their owners while holding food, as compared to when the owners entered the house.

Spayed and neutered dogs were 3 times less likely to jump on entering owners than intact dogs.

Dogs tended to jump up less when owners were crouched after entering the house. However, they were 8.7 times more likely to lick their owner’s face and 2.9 times less likely to run around in excitement in this situation.

When the owners were in the eating area with the bowl, the dogs were 10.5 times more likely to lick their owner’s face when the people were crouched versus standing.

All the dogs in the study wagged their tails quickly when owners entered the house while standing upright; 96 percent did the same when the owner was crouched.

Dogs licked their owner’s face more when the owner was crouching, in either situation.

In terms of licking the face, approaching in a low posture, and actual jumping up behavior, standing upright while holding food encouraged the behavior less.

But What Does The Research Tell Us?

Basically, this research shows that when dogs jump, their final destination is their owner’s face.

This may be because in dog language, licking another dog’s muzzle means they are begging for food. In domestic situations dogs are dependent on humans for food, so this behavior may translate to interactions with humans.

Dogs may also be showing submission, especially with the low posture, wagging tails and hindquarters, and holding the ears back. These behaviors may be related to the begging.

Dogs must jump to reach their owner’s face, and that is why this behavior happens. Because smaller dogs have a harder time licking the face, this might explain why they jump more often.

The begging for food behavior may be reinforced by owners who pet, hug, or give treats to their dogs in response. They are basically rewarding the dogs.

But it might not all be about begging for food. Dogs might also be seeking social contact. In other words, they want our attention, especially after we’ve been gone for a while.

Why Do Dogs Jump on You? A Summary

Basically, this study found that dogs jumping on people is affected by the position of the human body, and the context of the contact between dog and owner.

Dog jumping is also affected by size of the dog and whether the dog is neutered or spayed.

But this is just one study, and the researchers themselves say it’s too early for it to be conclusive. More research must be done to determine the true causes and contexts of dog jumping.

If you’re interested in more science-focused reads about dogs – check out this article on how dogs see color on TV!

Shepherd Dog Breeds – All The World’s Best Sheepdogs
Next Post: One Syllable Dog Names – Which Is Best for Your One of a Kind Dog?