No Reward Markers In Dog Training

You are here: Home / Training / No Reward Markers In Dog Training

If there is anything likely to cause disagreement between two basically positive trainers, it’s the use of no reward markers in dog training.

In theory, a ‘no reward’ marker gives the dog feedback to let him know he is on the wrong track.

A bit like saying ‘cold’ in that game you play with children where you say ‘hot’ when they are near a hidden object and ‘cold’ when they are moving away.

However, using a no reward marker in dog training is fraught with difficulty. This is because it may be arguably interpreted by the dog as an aversive.

The use of aversives have been shown to have downsides, including inhibiting the dog from exhibiting new behaviours.

What is a No Reward Marker?

A ‘no reward marker’ is a word or sound you make, when your dog chooses the wrong behaviour in a training session.

So for example, your dog is standing in front of you and you tell him to sit.  But he lies down instead.

With positive reinforcement training you would usually simply withhold the reward.

But there is another option. You could say “no” or “ah-ah” to the dog.

Provided your delivery of this verbal signal was neutral enough, it could be considered to be a no reward marker.

Those in favour of the no reward markers argue that it gives the dog extra feedback.

Those not in favour argue that the dog always finds the no reward marker aversive to some degree. And that it, therefore, acts as a mild punishment.

This could be counter-productive if your aim is force-free training. This is because we know that even quite mild punishers can have adverse effects. 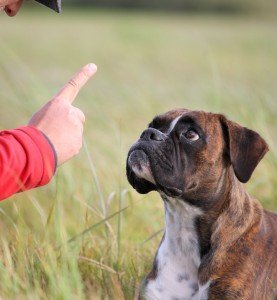 How Are No Reward Markers Used?

The idea is that the ‘no reward marker is a totally neutral signal to let the dog know that no reward will be forthcoming for the behaviour he just performed.

For the verbal ‘no reward’ marker to be truly neutral, the handler would need to erase any trace of irritation, or negativity from their voice.  And this can be harder than we think.

In practice, the use of a no reward marker is probably superfluous.

Many trainers feel that the absence of the ‘event marker’, which tells the dog he got it ‘right’, is all that is necessary for the dog to figure out he needs to try a different behaviour.

But you may be tempted to give it a go.

Should I Use a No Reward Marker?

If you are consistent and your dog is experienced at learning through clicker training, it is possible that a no reward marker may help him.

However, if your dog is quite sensitive, he may find the no reward marker aversive.

Inexperienced trainers will find, I think, that a no reward marker is probably not going to help you very much.

It is just one more thing to consider, and if you are not very skilful, it can easily become  inhibiting to the dog.

Most cross-over trainers have to concentrate quite hard initially in order not to slip back into using verbal aversives like “Grrr-Bad Dog!” or “NO!” Accompanied by intimidating body postures such as looming over the dog, or staring him down.

So if you come from a background of traditional training you might also want to give ‘no reward’ markers a miss. They are just too similar to verbal aversives.

A better alternative to a no reward marker is a positive interrupter.

We’ll look at teaching a positive interrupter in more detail later, but it is basically a happy, attention getting noise.

One that is sufficiently strongly associated with a reward for the dog to break off what he is doing and pay attention to his handler.

You can use any sound you like – a random word, a kissy noise, a waggoner’s chirrup, it’s up to you.

No reward markers aren’t for me. I like to keep things as simple as possible.

But what about you? Do you use no reward markers in dog training or do you think it goes against the ethos of positive reinforcement training?

Previous Post: « Fact vs Theory in Dog Training
Next Post: Does Obesity Shorten the Lifespan of Neutered Dogs?