You are here: Home / Training / How Positive Dog Training Works

Are you wondering how positive dog training works?

You’ve all seen dogs competing in talent shows and carrying out complex routines, such as

These dogs were all trained using positive reinforcement training.

Most people know that positive training is a kind way to train dogs, but you may not know how positive dog training works.

Most people think of dog training as praising a dog when he is good, and punishing him when he is bad.

The word punishment is a bit emotive and often linked with cruelty, so many people nowadays will refer to scolding or smacking a dog as a correction instead.

Almost all advanced dog training nowadays is carried out using positive reinforcement training, simply because it is the most effective form of dog training available to us.

And positive dog training usually avoids the use of corrections entirely, and focuses on the application of reinforcers. 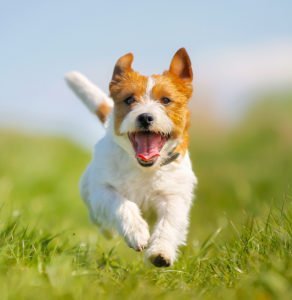 Dogs learn through the consequences of their behaviour.

Consequences that make the dog more likely to repeat a behaviour are known as reinforcers.

Consequences the make a dog less likely to repeat a behaviour are known as punishers.

Most often, reinforcers are what we might think of as rewards, such as food or toys.

But reinforcers can be anything that the dog enjoys, including opportunities to engage in natural behaviours like hunting, and chasing.

The word positive is a behavioural term that is mathematical in origin, and simply means adding something.

Modern dog trainers use positive reinforcers (adding something nice) to increase behaviours they like and avoid using aversives in training.

It seems obvious doesn’t it? But we often forget, when training our dogs, that motivation lies at the heart of all behaviour.

If I give you a square of chocolate for raising your hand when I press a buzzer, you might well raise your hand again next time.

You are probably not likely to keep raising your hand if I reward you with acorns. Or a cabbage leaf. Or if I say ‘good girl’ or ‘good boy’.

These low value rewards are not motivating enough as consequences, to ensure you keep putting up your hand.

Nor will you keep raising your hand when you have had enough chocolate. Or if you don’t actually like chocolate.

When Praise Is Not Enough

A recent study  showed that dogs were not motivated at all to seek out the company of humans who praised them.

Only dogs that were physically petted alongside the praise, showed increased preference for the company of that person.

So the chances are, praising your dog is not going to have any effect on his behaviour.

OK, we get that positive reinforcement training works by increasing desirable behaviours when effective rewards are selected by the trainer.

But what about when the dog is naughty? How do we diminish bad behaviours without punishment?

What If He Is Naughty?

Many people are curious to know what is to stop dogs from being naughty, if we take away all forms of positive punishment.

Remember, positive and negative are mathematical in meaning when we talk about behaviour. So whilst you think of punishing a dog as being a negative thing to do, hitting or scolding a dog is actually positive punishment (adding something nasty).

But how is bribing dogs with food going to work when there is something better on offer – like squirrels to chase – or other dogs to play with?

The answer of course is that it isn’t. Managing a dog’s behaviour using food is not effective.

Positive trainers don’t use food for management, they use it for training. And they have a different ace to play when dogs are naughty.

Another Way To Diminish Behaviour

Scientific experiments have shown that there are actually two ways to diminish and eventually extinguish, unwanted behaviours.

One of them is to punish the behaviour, the other is to ensure that there is no desirable (to the dog) outcome to the naughtiness.

If no benefit is derived from a behaviour, if nothing of any value happens after your dog does something you do not like, he will do it less often in the future.

This has been proven over and over again. But it can be difficult to believe. And it is certainly hard to believe that ‘no outcome’ can be as powerful as punishment.

You have probably seen with your own eyes, that ignoring a dog simply does not always work.

Let’s look at why.

Ignoring Is Not Sufficient

The truth is that mostly, when dog owners think they are ignoring bad behaviour,  i.e. providing the dog with ‘no consequence’ and not reinforcing the dog for being naughty, they are deluding themselves.

Mostly, what is happening, is that the dog is rewarding himself, by indulging in activities he enjoys. Even if that simply means running around in silly circles.

Effective positive reinforcement training is not simply about ignoring bad behaviour. It must include preventing the dog from self rewarding.

This is crucial and includes setting up systems to prevent the dog helping himself to rewards until he has worked through the training process to the point where we no longer need these system.

We’ll look at this more closely below.

That training process, and the way it is structured is critical to our success as positive reinforcement trainers.

Many dogs will automatically chase small animals like rabbits and squirrels. Some dogs just love to play with other dogs.

When this optimistic prediction fails to materialise, they tend to blame their training tools or describe the dog as ‘naughty’. In fact, neither the tools, nor the dog, is at fault.

We all understand that dogs need to be taught to carry out a behaviour in all kinds of situations. But achieving this means spending time putting the dog through a structured training programme. This is true no matter what methods are used.

Structured training creates a trained response under all manner of circumstances, by adding levels of difficulty in incremental stages.

We need to train dogs to carry out what will in time become automatic responses to clear cues from their handler in a very structured way.

Yet we often expect dogs to bridge the chasm from an easy task to a very difficult one in one giant leap.

As we have seen, positive reinforcement trainers get dogs to repeat the behaviours that they like – such as obeying cues like sit, down and come by following those behaviours with rewards.

They start off in a very low distraction environment, like a quiet room in the house. And then add levels of difficulty in layers, one by one.

What positive trainers don’t do is ‘bribe’ dogs. They don’t try to manage their dog’s behaviour by offering them food.

What they do manage, is the dog’s access to rewards.

In all dog training, it is vital that the dog is not rewarded during or immediately after bad behaviours.

Obviously you are not going to praise your dog or give him a treat when he is being naughty, or hopefully not. But there are lots of rewarding activities a dog can use in order to reward himself, if you don’t take steps to prevent this.

He could play with other dogs after ignoring your whistle for example.

So the positive reinforcement trainer takes special care to control the outcome of his dog’s behaviour.

Indoors, this is often achievable by manipulating the environment, training in a boring room, putting the dog’s toys away and so on.

Outdoors it is often achieved by training on a long line. Not permanently, but until the dog has worked through the training process to the point where he does not need it.

When bad behaviour does occur, they revise their training programme to make sure it doesn’t happen again.

As in so many things, prevention in dog training is easier and more effective than cure.

This might seem a little tricky, but actually it isn’t, it just requires a little forward planning, something successful dog trainers do routinely.

Whilst preventing access to rewards (so that unwanted behaviours die out) is an important training tool, equally important and far more fun, is pro-active training.

Positive reinforcement trainers are pro-active in that they prefer to set the dog up to get things right, rather than wait and react to him getting them wrong.

The key to success in this respect lies in creating alternative or default behaviours for different situations.

This is a way of training that quickly becomes second nature. And it is a good deal easier and more pleasant than trying to think up ways of ‘catching the dog in the act’ and applying ‘appropriate’ punishment.

It depends on the accurate selection of rewards that are valuable to the dog.

Most importantly the PR trainer focuses not on diminishing these undesirables, but on replacing them with desirable behaviours.

Positive reinforcement training is a structured process, as indeed is successful punishment based training. But it is a far more enjoyable process for the dog and his owner.

It works by teaching a dog to choose of his own free will, the behaviours you want. He makes the choice because you have taught him that this choice is the most rewarding outcome for him.

Your dog isn’t constantly looking for a way out or for loopholes in your training system that will enable him to engage in much longed for naughty activities.

He doesn’t want to be naughty, he wants to be good.

It is a win-win situation.