Corgi Pomeranian Mix – A Complete Guide to This Fluffy Breed!

You are here: Home / Breeds / Mixed / Corgi Pomeranian Mix – A Complete Guide to This Fluffy Breed! 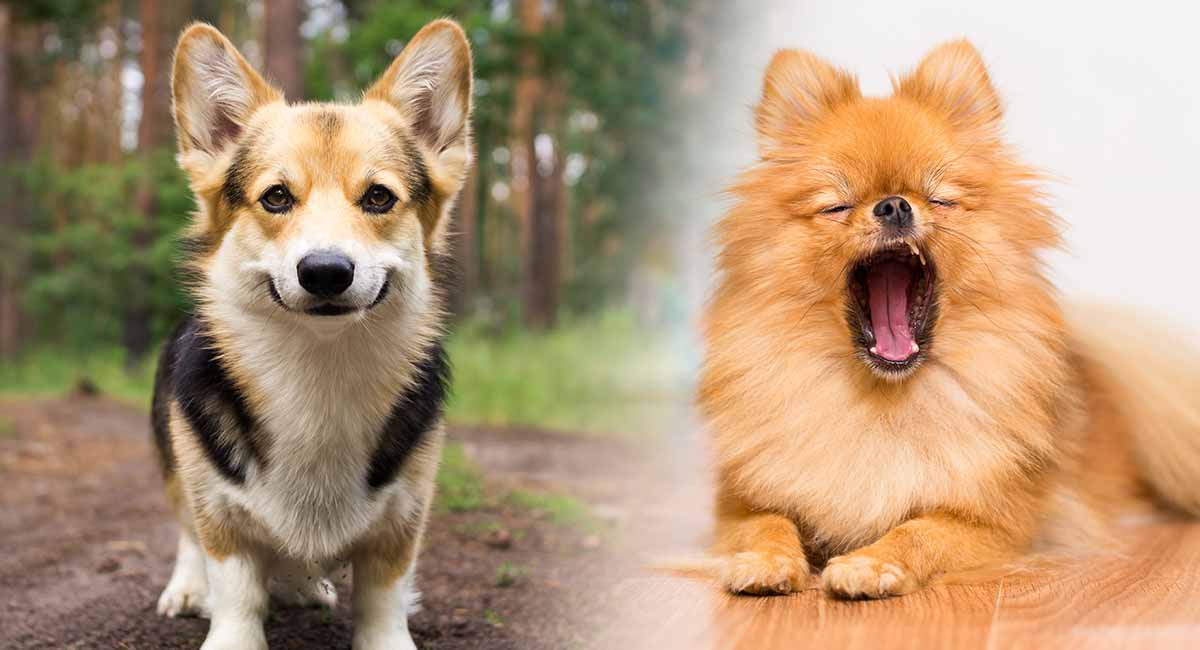 A Corgi Pomeranian mix dog is most often a cross between the Pembroke Welsh Corgi and a Pomeranian.

The Corgi Pomeranian mix has lots of traits which make them perfectly suited for companionship, but they might be tricky to train and unsuitable for households with small children.

Have you heard of the Corgi Pomeranian mix?

Whether you’ve already decided to adopt, or if this is a breed that you’re considering, we’ll tell you everything you need to know about the Corgi Pomeranian mix so that you can make an informed decision.

Where Does The Corgi Pomeranian Mix Come From?

The Corgi Pomeranian mix is the result of breeding a Pomeranian with a Corgi.

They are not an officially recognized breed on their own.

So, to gain insight into the Corgi Pomeranian mix we will take a look at its purebred parents.

Both types of Corgis were originally bred to herd sheep, horses and cattle. Because they are so low to the ground, Corgis were at the perfect height to nip at the ankles of the livestock. According to folklore, the original Corgi was a gift to children from fairies, and fairies and elves use them to pull their carriages.

Corgis’ long, low bodies are prone to intervertebral disc disease and hip dysplasia. In a moment we’ll look at the probability of those problems being passed down to a mixed breed puppy.

Pomeranians are members of the Toy Group. They weigh up to seven pounds and stand up to seven inches. They are named for Pomerania, which was in northeastern Europe, where Poland and Germany are today.

Starting from bigger Spitz dogs, they were gradually bred down to the tiny size they are today. Their disposition is friendly and inquisitive, and overall they are lively, athletic little dogs.

Both of the purebred parents are linked to royalty.

Queen Victoria was a big fan of Pomeranians, and Queen Elizabeth is possibly the most famous owner of Pembroke Welsh Corgis.

Pomeranians have another historical point, as well. When the Titanic sank, only three dogs survived, and two of those were Pomeranians.

The Corgi Pomeranian mix will probably take on physical traits from both parents. They might look much more like one parent than the other, or an intriguing balance of the two.

But there is no guarantee that any feature of either parent will appear in all their offspring. In fact, you might even see lots of variation with a single litter, or from one litter to the next.

We know that a Corgi Pom mix will be on the smaller side, as both parents are small. The mix will be somewhere between seven and thirty-eight pounds, but probably in the middle.

Pomeranians have many coat colors, although they are usually red or orange. Corgis can be black and tan, fawn, red, or sable. So your Corgi Pom mix will probably be shades of tan or orange, but not necessarily.

Both of the Corgi Pom’s forebears are athletic, intelligent, stubborn and vigilant. You can expect an active little dog that barks a lot.

Although they are small, both breeds require a good amount of exercise, so keep that in mind. And both parents of the Corgi Pomeranian mix are double coated and shed quite a bit. You may want to upgrade your vacuum cleaner now.

Corgis and Pomeranians have similar temperaments, so your Corgi Pomeranian mix will be a lively, sturdy intelligent little dog.

Both parents require a good bit of exercise, so don’t assume that because your dog is tiny he will be content to sit on a lap all day.

Corgis and Poms are excellent companion dogs, and also make surprisingly good watchdogs. Remember that Corgis were bred to herd cattle, so don’t be surprised if you find your cats or your kids in a cluster in the corner of the yard.

Like many herding dogs, the most prized working Corgis were those who could carry out their job even when their owner wasn’t in sight or earshot to give them commands.

They had to be very clever, but also confident making up their own mind about what to do next. For modern Corgis, choosing their own course of action is often still more rewarding than slavishly following the commands of their owner!

Meanwhile, Pomeranians are the quintessential lapdog. Their forebears were most prized for loving human company, not learning instructions or working.

This combination of traits means that a modern Corgi Pomeranian mix might be tricky to train, and perhaps even overwhelming for a first-time dog owner.

The most effective way to train a Corgi Pomeranian mix is using positive reinforcement techniques.

And if you’re new to dog training, a good puppy class is an excellent way to start, both to socialize the puppy and to really develop the bond between the two of you.

As with any dog, early socialization is important so that your pup will be confident and secure. Make sure your puppy is up-to-date on his vaccinations and off you go!

As the Corgi Pom is a mix, he is less likely to be prone to genetic disorders. But there is still a chance that he could inherit issues from either parent, or from both.

Corgis are prone to intervertebral disc disease because of their long low back. Being bred with a Pomeranian, a breed that does not have a long back, will mitigate the risk, although your puppy may have the longer back of the Corgi.

Both parental breeds have double coats, and they shed a lot. You will need to be prepared to brush them daily.

Corgis have a tendency towards weight gain, so be sure to exercise your dog sufficiently. Do not succumb to the very sad puppy eyes watching you as you eat dinner.

Corgi Pomeranian mix dogs are best suited to families with older children. They are descended from two friendly, smart, easy-to-get-along with breeds, which makes them ideally suited for companionship.

However, they might inherit a strong herding instinct from their Corgi parent and try to round up small running children and toddlers, which can cause frustration all round!

If your Corgi Pom is very small and takes after the Pomeranian, they will also need extra supervision around younger children. Small dogs are easy to trip over.

To our knowledge, there is no specific rescue organization for Corgi Pomeranian mixes.

Therefore, if your heart is set on a Corgi Pom mix, search reputable rescue sites that offer a variety of dogs. Or try contacting shelters which specialize in either of the parent breeds. We’ve included a list at the bottom of this article.

Rescuing an adult dog is a great way to give a second chance to a dog. Keep in mind that most dogs wind up in shelters not because of temperament problems, but because they were inconvenient. Many, many fantastic dogs have been adopted through rescue.

When looking for a breeder, keep in mind that a responsible breeder cares about his/her dogs and won’t just sell you a dog because you say you want one. Never buy a dog that has to be shipped to you.

A responsible dog breeder will allow you to visit and interact with the dogs. The parents of the puppies should be right there on site for you to meet.

They should ask for vet references from you if you have other pets, and ideally, if something happens and you can no longer keep the dog, a good breeder will take it back.

Please do avoid puppy mills and pet stores. These establishments are much more focused on making money than they are on the health of their animals.

A Corgi Pom puppy is an active, friendly little dog that thrives on attention. There is a lot to know about raising and training a puppy. Check out our training and care guides for more in-depth information.

That double coat is going to need a lot of grooming.

This brush by Pat your Pet is excellent for removing mats and reducing the shedding of your Corgi Pom mix.

Reviewers refer to it as “a lifesaver” and “A miracle worker.”

To prevent your little ball of fur from wandering off during grooming, try the Master Equipment small grooming table.

A nice feature of grooming a small dog is that you can place this table on any flat surface, such as your dining room table so that you can groom your dog at a comfortable height for you.

Since your Corgi Pomeranian Mix is likely to be active and intelligent, you’re going to need something to provide both exercise and stimulation. This toy by Swenter dispenses treats as your dog plays with it. However, don’t leave your dog unsupervised with this toy. Most people report it being sturdy (though noisy when it bangs around on the floor) but accidents can happen.

Or consider this toy by hyper pet that wiggles and vibrates.

If those aren’t your cup of tea, any ball or toy you can toss and have you dog bring back to you, or just pounce and chew on are fine choices.

Also check out our guide to the best food storage options. If you’re worried about training your Corgi Pomeranian mix, you should also take a look at dog whistles.

Pros And Cons Of Getting A Corgi Pomeranian Mix

When you are considering a Corgi Pomeranian mix, keep in mind the pros and cons of the breed. Of course, since the Corgi Pom is a mix, there is no guarantee which breed he will resemble the most, but both breeds have some similar traits.

If you are prepared to train your dog for the command “Quiet!” (as well as other basic commands) and don’t mind brushing your dog daily, the Corgi Pomeranian mix will make a fine pet.

As you can breed any dog you like with a Corgi or a Pomeranian, there are an infinite number of possibilities. Here are some of the most popular:

However, some of the mixes, such as the Corgi Pug mix and the Pekingese Shih Tzu mix can come with some serious health issues to be aware of.

We have not found any rescues specifically for Corgi Pomeranian mixes. However, if you know of any, please leave us a comment!

You might have some luck going to a Pomeranian rescue or a Corgi rescue. East Coast Corgi Rescue has both Corgis and Corgi mixes.

ForPaws Rescue also offers Corgi mixes, and Kathy Miller says Corgi mixes make great pets. She has a lot of great information in general. Her site is worth checking out.

You can also try all-breed rescues in your area, of which there are an infinite number. Be prepared to bring vet references and to sign paperwork saying you’ll bring your new pet to obedience class and license him or her appropriately.

Boston Terrier vs French Bulldog – Are They As Similar As They Look?
Next Post: Teacup Min Pin – Your Favorite Tiny Dog Just Got Smaller!