Chiweenie – Getting To Know The Chihuahua Dachshund Mix

You are here: Home / Breeds / Mixed / Chiweenie – Getting To Know The Chihuahua Dachshund Mix 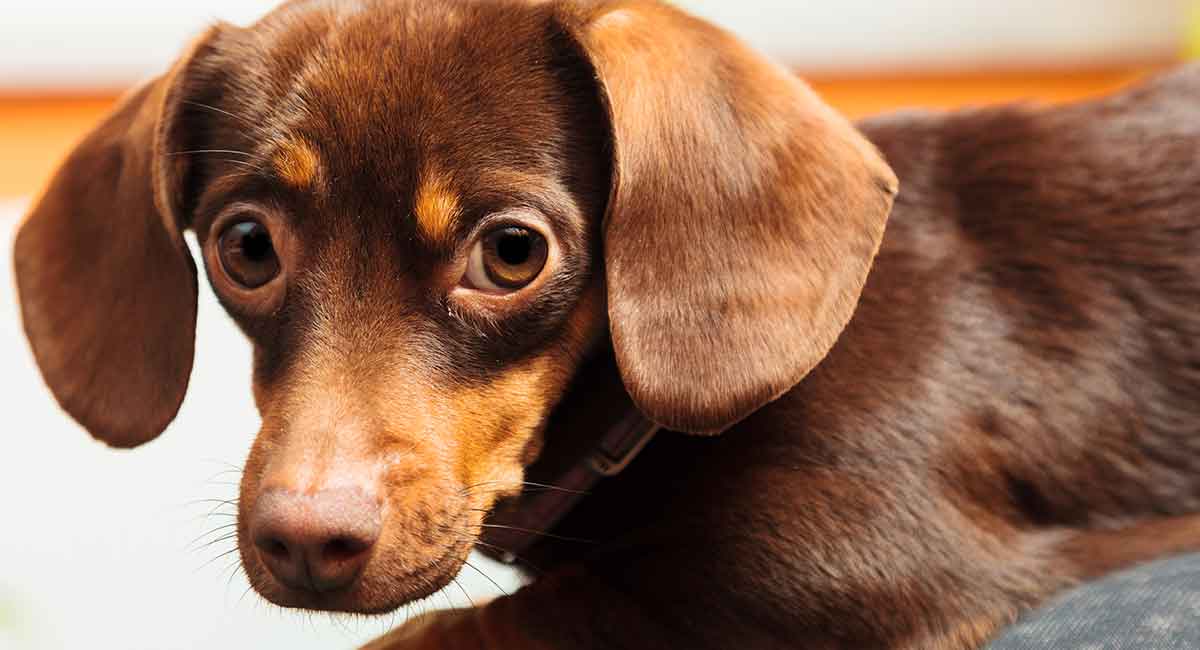 Sometimes just the name of a dog breed is enough to make you want one. Case in point: Chiweenie.

It’s a mix between a Chihuahua and a Dachshund. “Cute” doesn’t even begin to describe it.

Oh, did we mention that “Mexican hot dog” is another nickname for the breed?

Where Does the Chiweenie Come From?

The Chiweenie can trace his or her breed ancestors back hundreds of years. His Chiweenie many-times-great-grandparents were German hunting dogs, bred to wriggle their way into badger dens and flush out the occupants. They’ve been part of the American Kennel Club since 1885.

The Chiweenie’s Mexican ancestors are even older. The ancient Toltecs – they predate even the Aztecs – had a dog known as the Techichi, which looked a bit like a bulked-up Chihuahua. When the Aztecs came along, they started breeding the Techichi to be smaller.

The Spanish conquistadors arrived in the 1500s to find hardy little dogs living in rural villages. The State of Chihuahua seemed to have a lot of them, so the breed has forevermore been known as a Chihuahua.

Thanks to crossbreeding, you no longer have to decide between these two hardy little dogs.

The Chiweenie can also be a blessing to aspiring dog owners who can’t decide between a purebred and a mutt.

There’s no secret that it’s a topic of debate. Rescue advocates and mutt lovers claim that dogs with ancestors from multiple breeds are less prone to genetic disorders. Breeders and breed-loyal owners, meanwhile, claim that purposeful breeding can help to weed out undesirable health problems.

The truth is, there’s no clear answer.

A 2013 study examined the veterinary records of 27,000 dogs. Researchers looked for incidences of 24 genetic conditions. Among those:

The current trend toward crossbreed dogs let you get the best of both worlds. You get two breed histories that can balance out the genetic risks of one or the other, while at the same time staying clear of the disease predispositions of other breeds.

Fun Facts About the Chiweenie

Don’t forget the Dachshund! They were called Liberty Hounds in the United States during World War II because anything German received a poor welcome during those years.

But the Dachshund has gotten a lot of love as well. Celebrity owners include:

Chiweenies can look like pretty much any combination of Chihuahuas and Dachshunds that you can imagine.

Since both parent breeds are petite, your Chiweenie is guaranteed to be a little dog. If yours gets the Dachshund body, then you’ll get a long, little doggy.

If the dog grows to have the weight of a standard Dachshund, it will probably weigh between 16 and 32 pounds. But if he or she is sized more like a miniature Dachshund, it may never grow beyond 11 pounds.

The Chihuahua is even smaller, likely to be no more than 6 pounds. If your dog has Chihuahua and miniature Dachshund heritage, he or she will be tiny.

The Chihuahua line may also contribute:

There are innumerable ways in which these breeds can combine, but the whole will always be greater than the sum of its parts.

Your Chiweenie comes from a long line of bold little dogs. Dachshunds are known for being brave, energetic, and eager to get themselves into situations that they can flush out prey.

Chihuahuas are mostly known for pride and bravado, looking more interested in admiration than in actual work. This inspires some fun name ideas.

Both breeds are fiercely independent but like many small dogs, they can sometimes just be fierce. A 2008 review of data showed that the Chihuahua and the Dachshund scored higher than average for aggression levels toward humans and dogs. They also emerged as two of the six breeds most likely to bite or attempt to bite humans.

Researchers found that both the Chihuahua and the Dachshund were two of the three most likely breeds to be aggressive across many different situations. They are highly territorial and inclined to bite strangers, owners, and other dogs. Many of these bites may be anxiety based, since both breeds ranked high for fear behavior.

Of course, just because they may be snappier than other dogs doesn’t mean that all Chiweenies will be nasty. Owners that are good about socializing and training their dogs can end up with loving, albeit energetic, family pets. And even if they do snap, Chihuahua and Dachshund bites pose a relatively low risk of serious injury because they’re so small.

But that doesn’t mean that you should take their aggressive tendencies lightly. If you have small children, you might want to choose another breed.

You’ll have to spend some time teaching your Chiweenie not to bark since both the Chihuahua and the Dachshund have barking bred into them.

Likewise, because of the parent breeds’ tendency to aggressiveness, socialization is crucial. Take your Chiweenie out for walks instead of just turning them out in the yard, or take them to a dog park. The more you expose your dog to new situations, people, and other dogs, the less likely he or she will be to show aggressive tendencies.

Since both Chihuahuas and Dachshunds live an average of 13 years, a healthy Chiweenie can be with you for a long time. Unfortunately, both breeds have their share of health problems.

Chihuahuas have a particularly high risk of cardiovascular death Also, as very small breeds, they are predisposed to tracheal collapse and patellar luxation.

Small dogs like the Chihuahua are also prone to necrotizing meningoencephalitis. The latter is a serious neurological condition that can cause seizures, blindness, and other dangerous symptoms.

Make sure that dog parents with Chihuahua heritage do not have family histories of any of these conditions. Request testing when possible.

Dachshunds, meanwhile, carry a risk of intervertebral disc disease and other back issues. They are also at risk of several eye problems including progressive retinal atrophy (PRA). Make sure your Chiweenie’s parents have undergone testing for these conditions.

On the plus side, the Chiweenie is relatively easy to groom and doesn’t need excessive amounts of exercise. Chihuahua breeds do need to eat often to avoid dangerously low blood sugar, but any Chiweenie with a Dachshund body shape should eat a well-balanced diet and keep a controlled weight to avoid back issues.

Thoroughly trained Chiweenies can grow up to be well-behaved, but there’s always a risk that their anxiety will take over if they feel threatened. Small kids can make any little dog feel threatened.

Young children can also injure the dog. Chihuahuas are fragile-bodied dogs, and a small child doesn’t have the muscular control to avoid dropping the dog or squeezing him or her too tightly. For everyone’s safety, families are better off not taking on Chiweenies.

If you’re madly in love with the Chiweenie and don’t have small children, rescue can be the way to go. Health problems are easier to see in adults, and you’re not encouraging the breeding of unhealthy dogs.

Try calling Chihuahua and Dachshund rescues (mentioned below), or just google “adoptable Chiweenies” and see if you have any luck.

If you want a puppy, keep in mind that this is not a situation when Googling will cut it. Take the time to find a respected and ethical breeder, and avoid puppy mills and pet stores at all costs! Dogs from these backgrounds have an increased risk of psychological, social, and physical problems.

Perhaps the most important part of raising your puppy is potty training. It starts from day one and requires lots of time and attention, so get your hands on a good guide and follow it.

Potty training can be particularly challenging for owners of small-breed puppies. Your Chiweenie pup will have an exceedingly small bladder and minimal control over it. They’ll have to go immediately more often than you’d expect, so take them out often.

Remember that your Chiweenie is likely to have a delicate temperament, so avoid punishment and stick with positive behavioral reinforcement. If you want to keep your Chiweenie out of trouble, you’ll need him or her to respect you and want to obey you. Positive training will help with that.

Pros and Cons of Getting A Chiweenie

Even if you decide against the Chiweenie, you can still get the cute factor. Beagles, Yorkshire terriers, and Boston terriers are all adorable little dogs with good life expectancies.

Consider one of these breeds, but do your research! All purebreds have their own pros and cons.

Committed to getting a Chiweenie? Here are a few rescue sources to get you started.

Do you know a Chiweenie, Chihuahua, or Dachshund rescue in the USA, UK, Canada, or Australia? Comment below and add them to the list.

Is A Chiweenie Right For Me?

A Chiweenie won’t thrive with just any owner, but you may be just the person that some little guy or girl needs.

You could be a good fit if you’re an adults-only household, or at least if your children are older. You’ll need to be a diligent and consistent trainer, not to mention patient with excitable dogs.

Irish Setter Lifespan – How Long Do Irish Setters Live On Average
Next Post: Husky Price – How Much Does A Siberian Husky Cost?