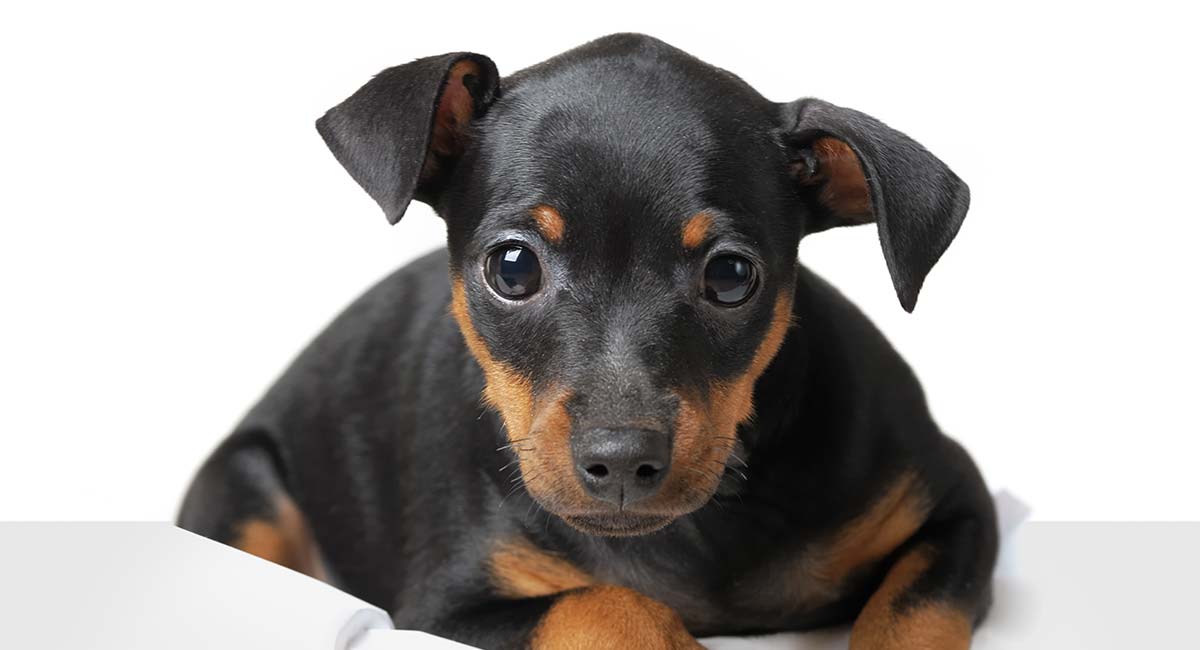 A teacup Min Pin is not a separate breed, but a Miniature Pinscher deliberately bred to be the smallest size possible.

Breeders might try to create a teacup Min Pin by outcrossing with an even smaller breed, deliberately selecting for individuals with dwarfism, or breeding from several generations of runts.

All of these can have severe consequences on health as well as size.

The Miniature Pinscher is a small but mighty dog, packed full of personality. It’s even referred to as the “King of Toys.”

“Min Pins,” as they are called for short, are not shrunken down Doberman Pinschers. They are in fact their own breed, which originated in Germany hundreds of years ago.

Historically, Min Pins were used to catch rats. Their vigilance and intelligence make them excellent watchdogs.

Miniature Pinschers have a sleek, shiny coat that requires little grooming. They have high-set ears and big, dark eyes that look alert and attentive.

The Appeal of the Teacup Min Pin

Miniature Pinschers are already pint-sized, compact pups. They weigh just 8 to 10 pounds and stand 10 to 12.5 inches when fully grown.

Breeders of teacup Min Pins aim to produce dogs which pack all the appeal of the Min Pin into an even smaller package. In general, Teacup dogs weigh less than 4 pounds.

It’s not hard to understand the appeal of such a tiny companion. Smaller animals, generally speaking, require less space, exercise, and food. This might be an appeal for owners with limited time, energy, or budget.

However, owners should always be prepared for health care costs and be able to spend ample time with their companion.

Furthermore, it’s not always possible to achieve the dream of a smaller dog, without compromising their health.

Let’s look at how teacup dogs are made, and the risks of it, next.

Where Do Teacup Min Pins Come From?

A teacup Min Pin is not a recognized breed, but a miniature-sized version of this toy breed.

There are three ways to may a small breed even smaller:

The first two methods are not typically recommended because of the health risks that they impose. Let’s take a closer look at each of these three methods.

The healthiest way to create a teacup-sized dog is by mixing two small breeds together. No, you won’t have a purebred dog, but that’s not necessarily a bad thing!

As with any breed or mixed breed, offspring can inherit health problems from their parents. It’s important to choose a responsible breeder who screen parents for any potential health risks.

Here are some Miniature Pinscher mixes that we would recommend:

A Chipin is a mix of a Chihuahua and Miniature Pinscher.

Like its parent breeds, a Chipin will be tiny. It will weigh just 5 to 11 pounds and stand 7 to 12 inches tall.

Temperament with this mix might be challenging, since both small breeds have big personalities! Proper training and socialization will ensure that a Chipin is well-adjusted.

A Chipin will be social, protective, and certainly lovable.

A Meagle is a cross between a Beagle and a Miniature Pinscher.

Now, this mixed breed won’t necessarily be teacup sized. However, it will have a ton of personality packed into a small body!

A Meagle might weight between 8 and 30 pounds and stand 10 to 15 inches tall.

Although it might be a little larger than a normal Teacup pup, a Meagle will make an excellent watchdog and will love to run around in the yard and play.

A Wire Fox Pinscher is a mix of a Min Pin and a Wire Fox Terrier.

Combining these toy breeds results in a small to medium-sized pup that will likely weigh less than 15 pounds and stand 8 to 12 inches tall.

A Wire Fox Pinscher will be energetic and need some exercise, but it will also make a cuddly companion.

Both breeds are considered “strong-willed” and will need a patient owner to train and socialize them.

Some dog breeds feature a genetic condition that causes disproportional dwarfism. Think the short legs of a Corgi, Basset Hound, or Dachshund.

This is called “chondrodysplasia” and can be genetically manipulated to make dogs smaller.

One key characteristic of the Min Pin is its proportional, yet long legs. Introducing this type of dwarfism to achieve teacup size with Miniature Pinschers would impact their overall look.

In addition, dwarfism can cause skeletal disorders. Veterinarians and breeders do not recommend breeding dogs that have genetic dwarfism disorders.

Most of the time, small animals produce small offspring.

It might be assumed that breeding the smallest dogs of a litter—or runts—would be an easy way to continually produce smaller puppies. This is done with the hope of eventually achieving teacup size.

Runts are born well below normal birth rates and are at risk of developmental issues.

In addition, runts of the litter may have congenital issues that no responsible breeder would want to pass along to future generations.

In some cases, runts grow up healthy and reach their regular adult-size. Also, many factors impact offspring size beyond the size of the parents.

Breeding runts is not the best or safest way to achieve the desired teacup stature.

When choosing any small type of dog, it’s important to know about the health issues that come along with their size.

The Miniature Pinscher breed is also susceptible to certain health problems, including:

A Teacup Min Pin will also be at risk for these health issues.

Responsible breeders will screen potential parent pups for these health issues, so they are not passed to future generations.

Don’t be afraid to ask your selected breeder to see the results of these screenings! It’s important to ensure the health of the puppy you are choosing.

Is A Teacup Min Pin Right for Me?

A teacup Min Pin might appeal to your living situation or lifestyle accommodates the needs of such a tiny pup.

You’ll need to be extra careful with a teacup Min Pin. While it may still have the big personality of a standard-sized Min Pin, it’s small stature may make it vulnerable to injuries.

Jumping up or down high surfaces, traversing stairs, and exercise and play should all be closely monitored to prevent injuries.

You’ll still need to provide exercise, socialization, and training for a teacup Miniature Pinscher. Our Puppy Training Guide will help you through this process.

Bear in mind that very small dogs often have difficulty toilet training, and many are never reliably dry in the house.

If you’re not ready to commit to the specialized needs of such a pint-sized pup, there are plenty of similar mixed breeds that may be your perfect companion. Here are a few suggestions:

An internet search for “teacup Min Pin” brings up several options to consider. But as mentioned above, finding a healthy purebred teacup Min Pin may be challenging to find.

If you’re set on a purebred Min Pin, you’ll want to ask the potential breeder important questions. Such as the health of the parents and the method used to achieve teacup size.

Avoid purchasing a teacup Min Pin from a pet store or puppy mill. They are not committed to responsible and healthy breeding. In addition, the puppy will likely be very overpriced.

We’d also highly recommend selecting a similar mixed breed of the several mentioned in this article to avoid the health risks associated with the creation of Teacup Min Pins.

Adopting a Min Pin in need is a great way to give a dog a second chance at life.

There are not necessarily specific rescue organizations for teacup Min Pins, but you may be able to find a smaller-sized adult!

Here are some Miniature Pinscher rescue organizations to look in to:

Corgi Pomeranian Mix – A Complete Guide to This Fluffy Breed!
Next Post: Mini Australian Cattle Dog – Your Favorite Pup in a Tiny Package »