Dogue de Bordeaux Lifespan Can Be Short – But Is Your Pet in Danger?

You are here: Home / Health / Dogue de Bordeaux Lifespan Can Be Short – But Is Your Pet in Danger? 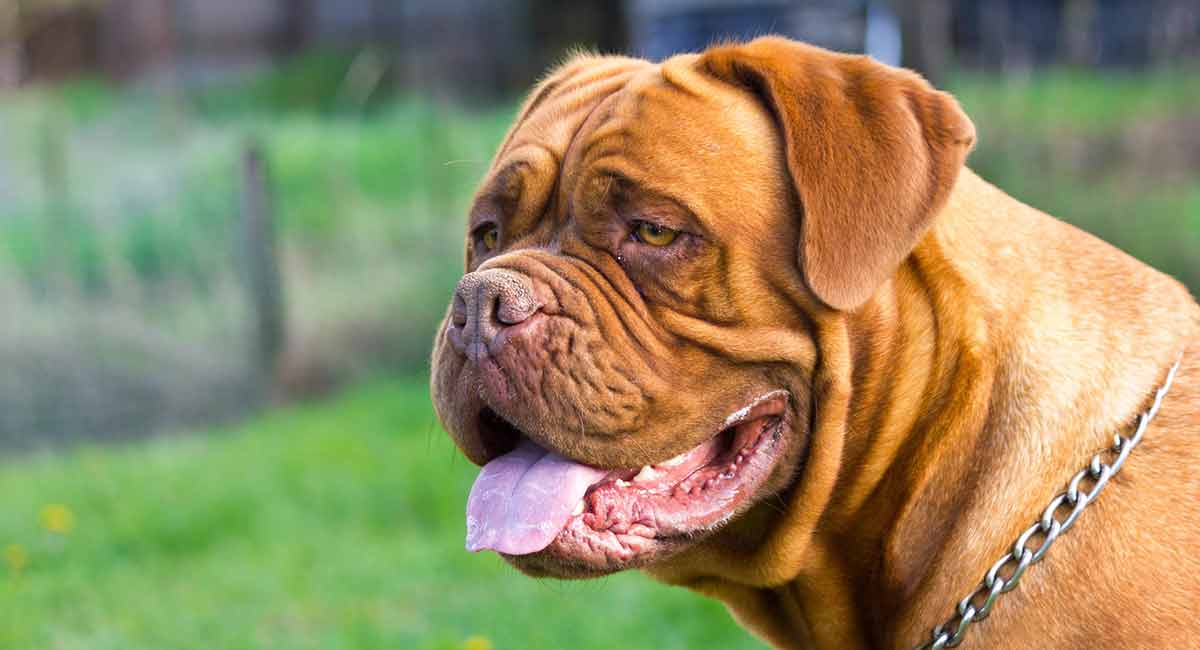 The Dogue de Bordeaux lifespan is around 5 years on average.

Sometimes known as the French Mastiff or the Bordeaux Mastiff, according to many sources, this breed has the shortest lifespan of all dogs.

Living on average around 5 years only, such a short lifespan raises lots of questions.

First and foremost, why does such an ancient, powerful-looking breed of dog die so young?

In this article, we will have a closer look at

First, let’s have an even closer look at the Dogue de Bordeaux life expectancy.

However, the Dogue de Bordeaux’s lifespan is alarmingly brief.

So while we know that these dogs don’t live long, the reasons they die so young are worth looking into.

A study published in 2018 surveyed 278 Dogue de Bordeaux owners regarding their health.

It was found that over the one year response time, 31% of these dogs had died suddenly and unexpectedly.

Ultimately, the study concluded that more research needs to be done to determine exactly what causes these sudden deaths.

But there is some interest in investigating the possibility that the breed’s cardiac health needs to be examined and that this could be behind these sudden deaths.

A study was published in 2013 which looked at the cardiac health of Dogue de Bordeaux dogs in Israel.

It was found that amongst these dogs, a high proportion of them had inherited cardiac problems.

This could be put down to the small gene pool of these dogs in Israel.

However, the researchers suggest this finding could reveal clues about the particular health problems the breed is susceptible to.

Other than these unexpected deaths, likely related to cardiac issues, there are a few commonly reported problems amongst the general population of the Dogue de Bordeaux:

It is also worth noting that these dogs are brachycephalic, meaning they have a flattened face.

This leads to a variety of problems associated with breathing and temperature control.

In some cases, the complications associated with brachycephaly can lead to premature and preventable deaths.

Many of these conditions can cause pain and discomfort, but they are not always life threatening or life limiting.

Is There More at Play in the Dogue de Bordeaux Lifespan?

Sudden deaths aside, there must be more at play to bring the Dogue de Bordeaux lifespan down so low.

One group of scientists had a paper published in 2016 which looked into the role the immune system may have.

It was found in this study that notoriously short-lived dogs such as the Bernese Mountain Dog, Great Dane, and Dogue de Bordeaux all had something in common, aside from their huge size.

The thymus is the gland responsible for regulating immune function.

It was discovered that the thymic output started slowing at around just 1 year of age in these short-lived breeds.

In some cases, the output levels were completely undetectable in these giant, short-lived breeds at a rather young age.

However, in breeds with a long lifespan, levels were still detected in geriatric dogs, 13 years and over.

This included breeds such as the Jack Russell and Yorkshire Terrier.

A lot more research needs to be done to get to the bottom of this.

But researchers suspect that certain growth hormones have a role to play in the early decline in thymic output.

Growth hormone levels have been shown to have a role to play in thymic function.

This would also explain why size is so often linked with lifespan in dogs.

Bearing in mind Dogue de Bordeaux health issues, let’s discuss if anything can promote the health of these dogs.

This breed certainly has an uphill battle when it comes to their health and lifespan.

However, it is not all doom and gloom.

Do you remember the film Turner and Hooch in the late 1980s?

Hooch was a Dogue de Bordeaux named Beasley who lived to the ripe old age of 14!

Dedicated fans of the breed are making efforts to improve the health and well-being of these dogs.

For instance, there has been research into the breed in recent years, such as the studies quoted in this article.

Some of these studies have been focused on working out just why the Dogue de Bordeaux lifespan is so short.

Responsible breed clubs actively encourage health testing, and members have demonstrated they are willing to provide data to scientists researching the health problems experienced by this breed.

Of course, a lot can be done by breeders to ensure that dogs with health issues are not used to breed with.

This may help in reducing the chances of dogs with lameness, breathing difficulties, or sudden death.

But there is still more research to be done to determine why large-breed dogs have such a short life span in general.

Aside from these solutions, a few other things can be done to keep your Dogue de Bordeaux healthy and happy.

Dogue de Bordeaux Health – What to Look Out For

Some bloodlines of Dogues can be susceptible to demodectic mange.

While any dog can develop this skin condition, it is thought that a weakened immune system is often a trigger.

It appears that some bloodlines of Dogues have a weak immune system genetically.

Therefore, they could struggle with bouts of demodex throughout their entire lives.

Feeding them a high-quality diet will also help to help fight off bouts of this condition.

However, if they are suffering, there are medications available which treat the condition.

But, the best defense against demodex is thorough research before you buy your Dogue.

Check that the pup’s parents and even grandparents were picked carefully and were free from inherited weaknesses.

As with most large, deep chested dogs, Dogues are prone to bloat.

This is a medical emergency that requires immediate intervention by a veterinarian.

Educate yourself on the signs of bloat so you are ready to take immediate action if required.

Here are some signs a dog could be suffering from bloat:

If you notice any of these signs, take your pooch to the vet right away.

Due to their floppy faces, Dogues may also suffer irritation and ulceration of the eyes.

Keep an eye on their peepers.

If you notice any irritation, take your Dogue to the vet for a checkup.

At times, corrective surgery is required to stop the excess skin and fur rubbing the dog’s eyeball, causing irritation and damage.

As we have mentioned, the Dogue de Bordeaux is a brachycephalic breed.

As such, they will likely have some breathing problems and issues with temperature control.

Be careful on hot days not to exercise your dog.

And make sure they have somewhere cool to rest with plenty of water.

If your dog breathes loudly or sounds like they are snoring all the time, take them to the vet to assess their airway.

At times, surgery is required to open up the airway and help brachycephalic dogs breathe and sleep easier.

Make sure the parents and grandparents of your pup were selected carefully to be free of such hereditary issues.

Sadly, it cannot be denied that the average Dogue de Bordeaux does not enjoy a long life. They often pass away when other breeds are in their prime.

Despite being an ancient breed, some problems have been passed down and even amplified over the years.

However, there are things fans of this breed can do to help.

First and foremost, ensure that pups are only bred from healthy parents and grandparents. The breeding dogs should have been thoroughly tested and cleared of health conditions.

Similarly, stay up to date with and support studies into why these dogs are suffering such short lifespans. This will help owners and breeders make responsible choices to improve the health and well-being of the breed.

If you have a Dogue de Bordeaux, be prepared.

These big, strong-looking dogs might actually need a lot more time, money, and care invested in them than their burly stature indicates. Especially to maximise the Dogue de Bordeaux lifespan.

Holder, A., Mella, S., Palmer, D.B., Aspinall, R., Ctchpole, B., “An Age-Associated Decline in Thymic Output Differs in Dog Breeds According to Their Longevity” PLOS One, 2016