Doberman vs German Shepherd – Which Loyal Breed Is The Best Pet?

You are here: Home / Breeds / Breed Vs Breed - Compare Your Favorite Breeds Of Dog / Doberman vs German Shepherd – Which Loyal Breed Is The Best Pet? 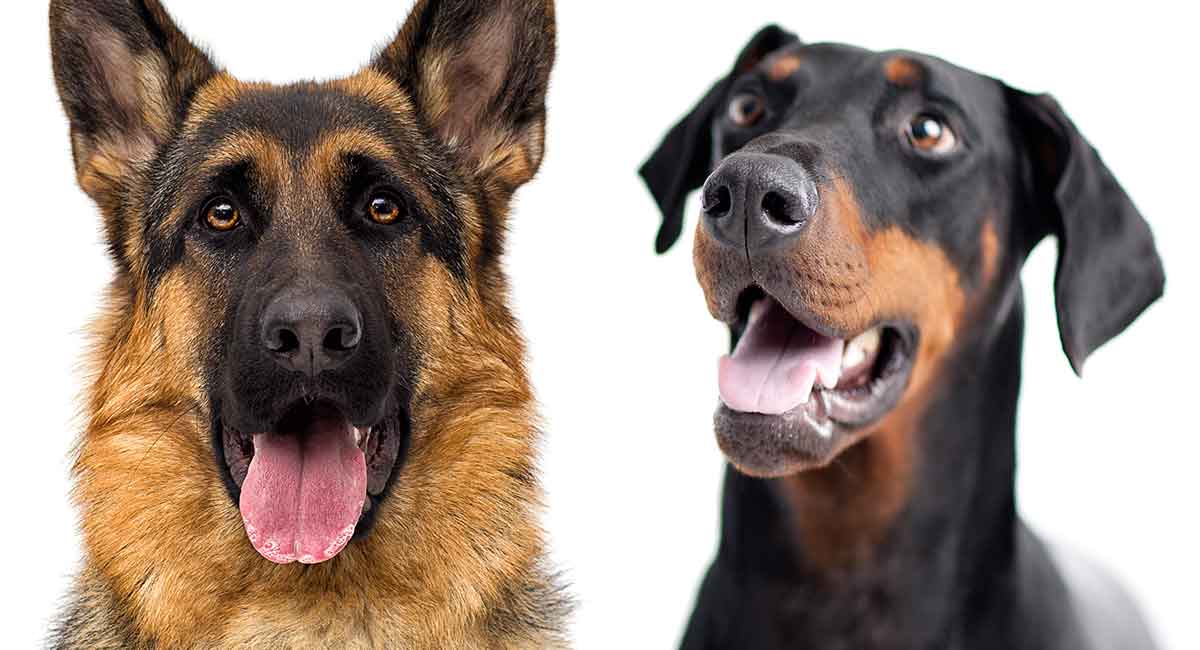 Are you wondering how the Doberman vs German Shepherd compare? These breeds can seem similar at first. But there are some key differences!

Dobermans are guard dogs in the ‘working’ breed group. Whereas GSDs are found in the ‘herding’ group!

Dobermans are around 30% bigger on average than a GSD. Plus they tend to live slightly longer!

There are also some key differences in appearance. Such as the German Shepherd long shaggy coat vs the Doberman’s short, trim coat!

Read on for a more in-depth comparison between the Doberman vs German Shepherd! Which is the best dog for you?

Choosing Between a Doberman vs German Shepherd

Are you having a hard time choosing between the Doberman vs German Shepherd?

The best way to decide is by comparing every aspect of these two popular breeds.

In this article we’ll do just that. So that you can make an informed choice!

Both breeds come from Germany. But their histories are quite different. So let’s take a look these in more detail.

The Doberman Pinscher was developed in the late 19th century by a dog breeder and tax collector named Louis Dobermann.

He wanted an imposing and loyal protector to go with him on his rounds.

Dobermann used a mix of different breeds to create his dog. This included the Black and Tan Terrier, German Pinscher, and Rottweiler.

The German Shepherd was born around the same time. But he was made for a different purpose.

He bought this dog and renamed him Horand von Grafrath. This was the first registered German Shepherd Dog.

There’s no doubt that both the Doberman and the German Shepherd are handsome breeds. Each with their own unique looks.

So let’s find out what to expect from these breeds.

The Doberman is the larger of the two.

This powerful dog stands proudly. It is both muscular and fast.

This dog is longer than he is tall, well-balanced, and muscular. They have a wolf-life appearance with a chiseled head, long, wedge-shaped muzzle, and moderately pointed ears.

Their thick, waterproof, double coat is of medium length. It is most often seen in tan and black. But it can also be found in gray, red, brown, and white. Or even a mix of these colors!

This study on perceived behavior, found that only the Rottweiler is seen as being more aggressive than the Doberman and the German Shepherd. But, research suggests that there are inconsistencies with breeds who are see# as “aggressive.”

These common misconceptions have led to negative stereotypes for certain breeds.

So what is the Doberman vs German Shepherd temperament like?

There’s no question that the Doberman has strong protective instincts. After all, it’s what people bred him for in the first place. These dogs have a reputation for being fearless, intelligent, energetic, alert, and very loyal. This reputation inspires some tough dog names too!

But, it’s important to remember that dogs, like people, are individuals.

There are some Dobermans who can be overly aggressive. But, on the whole, they’re now being bred with a steady decrease in sharpness.

Dobermans are people pleasing dogs who need lots of attention from those they love.

Like the Doberman, the German Shepherd is loyal, smart, courageous, and protective.

These dogs are also prized for the calm, caring nature that makes them great family pets.

In fact, in terms of breed popularity, they’re second only to the Labrador Retriever according to the AKC.

Some studies find the German Shepherd more likely to instigate more fights with dogs than other breeds. But, this may have a lot to do with a lack of proper training and early socialization.

It’s important to remember that the GSD breed has strong guarding instincts, like the Doberman.

While this makes them great watch dogs, you want them to be friendly and confident, rather than over-protective.

Both of these breeds can make wonderful family pets. But these are both large dogs who would do better in families with older children.

Make sure to supervise toddlers and children around any dog.

We really can’t stress enough how important early socialization is for either of these breeds.

These dogs were bred to do a job. You need to show them the ropes of how to get along in the human world. This will help them to become well-rounded and emotionally stable canine citizens.

Obedience training and clicker training would work well for either breed. This uses a signal to tell the animal when they’ve done something right.

Luckily, both of these dogs are highly intelligent and very trainable. They can learn easily and respond quickly.

For more tips on training a German Shepherd, check out this article.

The Doberman is a born athlete. These large, energetic dogs need a lot of exercise to stay healthy and happy.

Long walks and jogging alongside their owner are good. But these dogs need a large fenced area where they can run freely at top speed.

Likewise, the German Shepherd is very active and athletic. This breed also needs lots of exercise to be physically and mentally fit.

The German Shepherd will need at least two hours of daily exercise to ensure they don’t become frustrated and develop undesirable behaviors.

Canine sports such as obedience, tracking, and agility are ideal for either of these dogs.

Certain inherited conditions are a risk for all purebreed dogs. The Doberman and the German Shepherd are no different.

Never buy a dog from a breeder who hasn’t genetically tested their breeding stock for known health conditions.

Both breeds are prone to hip dysplasia. This is an abnormal formation of the hip socket that can lead to lameness and painful arthritis.

Bloat is also a problem for these two large breed dogs.

This life-threatening condition occurs when the stomach twists, putting pressure on the dog’s organs and making it hard to breathe.

But what other health problems can they have?

The German Shepherd is also at risk for conformation concerns. This is due to their sloping back.

It wasn’t always this way. But some breeders who breed for the show ring, have created a dog with a steeply sloping top line and extreme angulation in the back legs. This can put the breed at risk for spinal problems.

The Doberman Pinscher has a short, sleek coat that only needs a quick brushing to keep him looking his best.

This will get rid of loose hairs, as they will shed quite a bit.

These dogs will lose hair year round. But they will shed profusely once or twice a year during shedding season.

Both breeds need to be bathed only occasionally. But they should have their nails trimmed at least monthly and their teeth cleaned regularly.

A high-quality, age appropriate food is important for both of these breeds.

These articles on the best food for German Shepherds and Doberman puppies offer more details and brand recommendations.

Have you decided on a winner for the Doberman vs German Shepherd debate?

Regardless of whether you choose a Doberman or a German Shepherd, you need to be able to spend a lot of time exercising them every day.

Devoting time to socialization and training will also be crucial. Both of these breeds have the potential to be aggressive towards other animals.

Many pet owners will attest that either of these dogs can make a loving family pet. But homes without young children would suit them best.

In this article we’ve looked at a lot of the serious health problems that each of these dogs faces. For this reason, we recommend rescuing an adult.

Both of these breeds are very popular, with shelters dedicated to them throughout the U.S. and beyond.

Doberman vs German Shepherd, which one did you choose? Tell us in the comments below.

If you’ve enjoyed reading the Doberman vs German Shepherd debate, you might also enjoy our other breed comparison guides!

Take a look at some of the links below to see how other dog breeds compare to each other.