Boston Terrier vs Pug: How Different Are These Lap Dogs Really?

You are here: Home / Breeds / Breed Vs Breed - Compare Your Favorite Breeds Of Dog / Boston Terrier vs Pug: How Different Are These Lap Dogs Really? 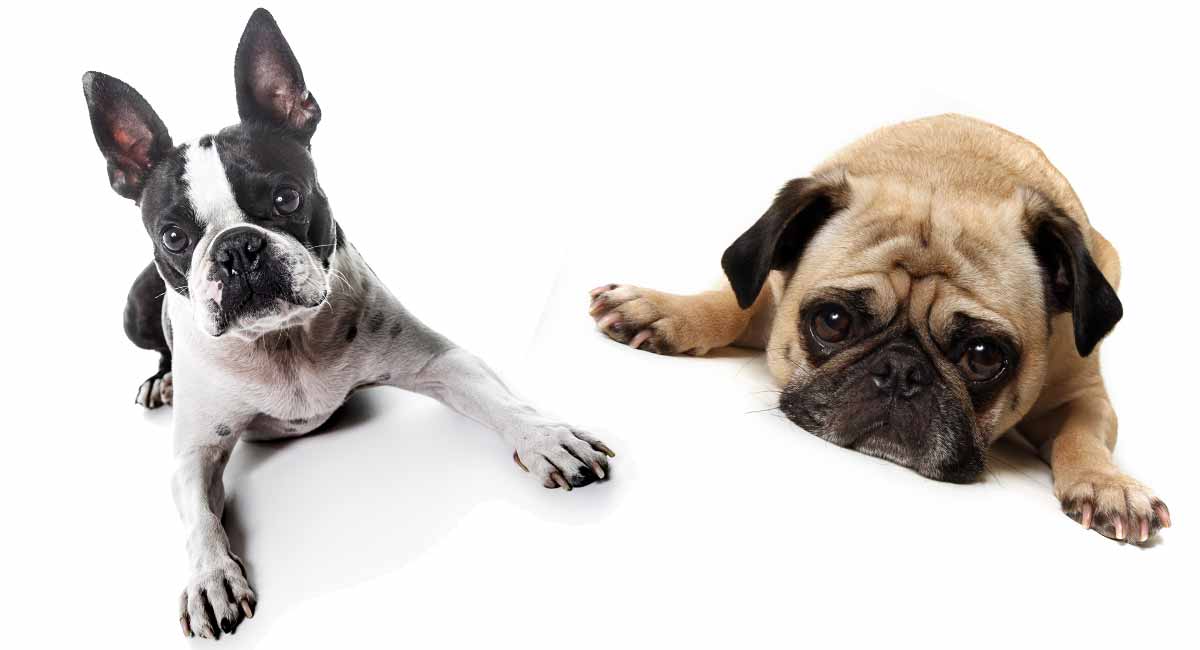 Which breed is your favorite out of the Boston Terrier vs Pug? Boston Terriers and Pugs are both enjoying a surge in popularity as small, friendly companion dogs.

Both are small breeds with brachycephalic features, like a flat face.

But, choosing between a Boston Terrier vs Pug isn’t just a matter of comparing looks and personalities.

This choice comes with some huge implications about health and lifetime vet costs, too.

If you are searching for a companion dog, you may have narrowed down your choices to Boston Terrier vs Pug.

But how do you choose between these two popular breeds? Especially with their similar looks and loveable personalities?

While the Boston Terrier and the Pug have many similarities, there are also certain differences. Plus, each breed has specific traits unique to them.

What they do have in common, though, are flat faces and short snouts. This makes them both brachycephalic breeds. But this is a vital concern for any potential owner.

What we will Look At

In this article, we compare the Boston Terrier and the Pug by looking individually at their origin, temperament, size, and physical appearance.

We also see what they are both like to train. Along with their exercise needs and health issues.

So, if you want help deciding if one of these dogs is right for you, keep reading!

The Boston Terrier first came about in England during the 1860s for dog fighting. It is believed to be the result of cross-breeding White English Terriers with English Bulldogs.

A dog named Judge was one of the first ever Boston Terriers who was bought by an American and brought back from England to Boston. Hence the name.

The Boston Terrier was further developed in the USA as a loving companion rather than a fighter. It is now a popular choice of pet around the world.

The Pug’s history goes right back to ancient China some 2000 years ago.

These flat-faced dogs were very popular with Chinese royalty who treated them with the utmost respect. They even gave them their own small palaces and guards!

The Pug was introduced to the rest of the world by Dutch traders during the 16th century. This, too, is now one of the most highly favoured breeds around.

Both the Boston Terrier and the Pug have flat faces. This is known as being brachycephalic.

Boston Terriers’ and Pugs’ brachycephalic features give them a babyish look even in adulthood which we humans are programmed to find appealing.

But they’re also linked to some serious health conditions which we’ll revisit shortly.

First, let’s compare some of these dogs’ other features.

The Boston Terrier is a stout, muscular dog with a broad head and protruding eyes. Plus, they have large erect ears that resemble those of a bat. Their short tails are set low and are either straight or corkscrew.

The smooth, short coat of the Boston is either black, brindle, or seal. But it has white markings on the face, muzzle, and chest that makes them look like they are wearing a tuxedo.

The Pug has a compact square body with a big head, broad chest and strong but short legs. This breed is well known for its bulging eyes, black face mask, and tiny folded-over ears.

They have many wrinkles across the forehead. This gives them a worried look. But, the Chinese believed this brought them good fortune. One of their most popular features is their curled over tail.

The Pug has a short sleek coat. Its most common colors are fawn, black, apricot, and silver fawn.

Although the two breeds are small, the Boston Terrier is generally larger than the Pug.

Because of their small sizes, both are popular among apartment dwellers. This is because they do not need much space.

The Boston Terrier and the Pug are bred as companion animals. So, they share many similar personality traits.

Despite the Boston Terrier’s fighting background, there are few concerns avout aggression or biting. But they can become excitable at times and bark at other dogs.

Both breeds have an even temperament and are friendly, loyal, and affectionate, getting on well with children and other pets.

But if you want entertainment, the comical Pug is renowned for amusing his family with his funny antics.

Like many companion dogs, both the Boston and the Pug are happiest when they are with their family. As they thrive on human company.

They should, therefore, never be left home alone for extended periods. They can suffer from separation anxiety leading to destructive behaviors.

Both the Boston Terrier and the Pug are intelligent dogs who love to please. But are there any differences when it comes to training?

While either one of these breeds is suitable for novice dog trainers, the Boston Terrier is the easier of the two. This is because the Pug tends to be strong-willed.

Pugs can be challenging to train as they are often stubborn and strong-willed. Although not in an aggressive way. But, as they are also very smart, they become bored quickly.

Training Boston Terriers is slightly easier than Pugs as they have a natural inclination to being well-mannered. This is why they are often known as “The American Gentleman.” They also have a stubborn side. But less so compared to the Pug.

With both breeds, training should start as soon as possible using positive reinforcement methods, giving treats and plenty of praise.

Sessions should be short but fun to hold their attention.

Like many small dogs, the Boston and the Pug are known for being hard to potty train. Crate training is a practical and useful method, as no dog wants to soil their bed.

Early socialization is essential for any puppy if they are to grow up into a well-adjusted adult dog.

Introduce as many different people, dogs, and animals as possible to your pup in various situations as well as in your home.

Having a well-trained and sociable dog who is obedient is much more pleasant to be around.

As brachycephalic breeds, neither the Boston Terrier nor the Pug can cope with strenuous activities due to their breathing issues. They still need exercise, though, to maintain their weight and to stay healthy.

Two or three walks a day of no more than 15 minutes is enough. Exercise them during the coolest time of the day during hot weather as they are prone to overheating. They should live in a home with air conditioning.

The Boston Terrier has higher energy levels than the Pug. So he needs some playtime, such as running around in a secure backyard for ten minutes if it is not too hot, or playing indoors.

Although swimming may seem like an excellent way to cool down, it is unsafe for both the Boston and the Pug as with their flat faces and compact bodies. This is because it is hard for them to stay afloat.

Both the Boston Terrier and the Pug have similar health issues.

As brachycephalic breeds, they are prone to various respiratory conditions due to their shortened muzzles and flat faces. Plus, their bulging eyes makes them vulnerable to eye diseases and injuries.

The Boston Terrier and the Pug are also prone to hemivertebrae. This is a spine deformity common in dogs with screw tails as well as skin issues due to their skin folds.

Like most small dogs, both breeds can have luxating patella.

The Pug is also prone to Pug Dog Encephalitis (PDE) and Legg-Perthes disease.

Although brachycephalic breeds are cute, their quality of life is greatly affected by their appearance.

On a day to day basis, this means continual discomfort and an increased risk of sudden death during exercise or hot weather.

Over the course of their lifetime, Boston Terrier and Pug owners also need the financial resources to pay for large amounts of veterinary care to tackle these issues.

These problems with their body shape significantly reduce Boston Terrier and Pug quality of life. But that doesn’t necessarily mean loss of years.

Both breeds live relatively long lives. So they are a long-term commitment.

The average lifespan for the Boston terrier is between 10 and 12 years. Whereas the Pug lives from 12 to 15 years.

While both breeds have short coats, the Boston Terrier is easier to maintain when it comes to grooming. This is because they do not shed as much as the Pug.

The Boston can be brushed once a week. But the Pug needs brushing at least three times per week.

Both breeds, though, need their faces wiped daily with a damp cloth to keep the wrinkles clean and prevent bacterial infections.

The grooming routine for any dog should include regular brushing of the teeth, cleaning of the ears, and trimming the nails.

Both the Boston Terrier and the Pug are prone to obesity. So you need to monitor their calorie intake.

High-quality food should always be fed to ensure your pup has the right amount of protein and other nutrients.

Look out for kibble shapes specifically designed for brachycephalic dogs to be able to pick up easily.

Which Breed Makes the Better Pet?

We have looked at the similarities and the differences between the Boston Terrier vs Pug.

Because they are both so extremely brachycephalic, as well as prone to hemivertebrae and numerous other conditions, we cannot recommend either breed as a pet.

Instead, we encourage you to look at healthier breeds with similar temperaments.

There are lots of other great comparison guides we’ve written for you. Take a look at some of the most popular ones below:

Rottweiler Pitbull Mix – Perfect Puppy Or Gorgeous Guard Dog?
Next Post: Dog News And Events From Around The World