Blue Chihuahua – What This Unusual Color Is Really Telling You

You are here: Home / Breeds / Blue Chihuahua – What This Unusual Color Is Really Telling You 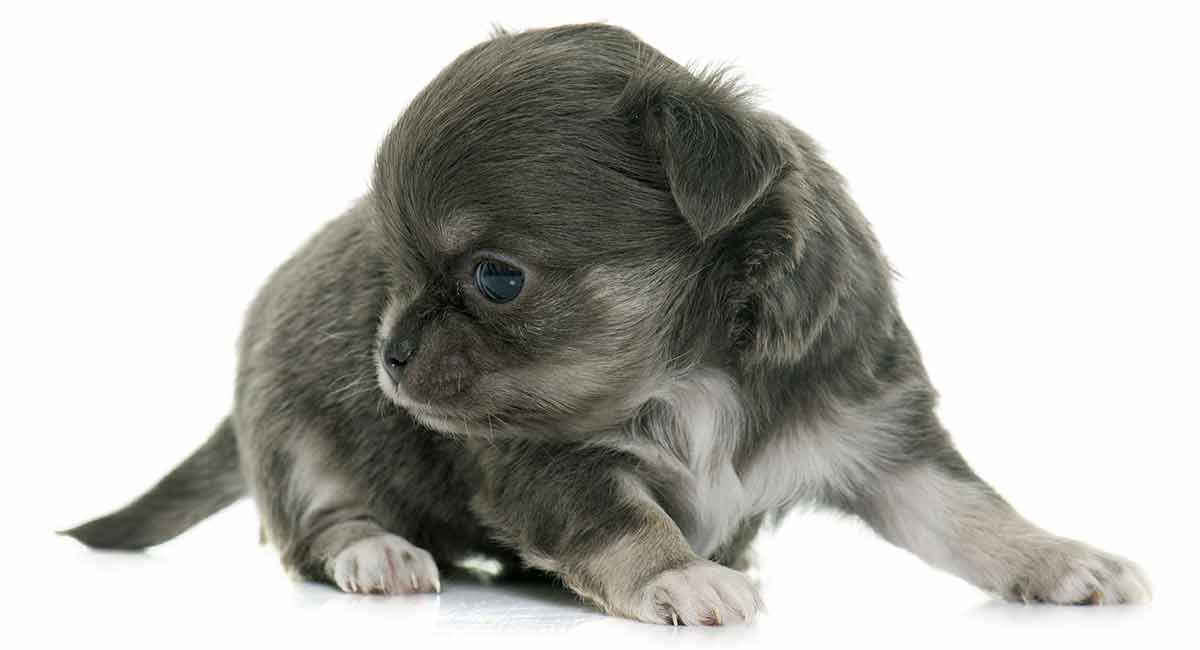 The blue Chihuahua is an Instagram star waiting to be born. But how does this tiny dog compare to others?

This interesting coat color doesn’t affect temperament. Your little dog will be loyal and affectionate.

But this coat color does bring some additional health concerns we should know about.

In this article, we’ll discuss how blue Chihuahuas get their color and how that affects their overall health and temperament.

The “blue” coloring of a Chihuahua is really more of a gray than an actual blue.

Blue coated Chihuahuas are sometimes thought of as rare.

However, for breeders who truly love Chihuahuas, their top priority is preserving all the best qualities and welfare of the breed.

When choosing a sire comes down to color, then the frequency of blue litters will depend on breeders’ personal tastes, and perhaps the demand from hopeful dog owners.

Blue coloring is the result of a homozygous recessive genotype, typically denoted as dd.

If that sounds a little cryptic, don’t worry.

The dilute gene changes the appearance of coat color, by making it more faded and pale. Literally diluting the pigment in each strand of fur.

Homozygous recessive means the dilute gene only works when a puppy inherits it from both mom and dad. Hence the genotype dd – two copies of the dilute gene!

When the dilute gene works, it modulates the appearance of another color.

In the case of this little dog, the other genetic instruction they carry for coat color says “be black!”.

But when the dilute gene reduces the amount of black pigment being produced, and what remains takes on an ethereal blue appearance instead.

But when you get one of these dogs, are you getting more than just striking coat?

These pint sized pets have been companion dogs for hundreds of years.

They have an innate craving for human attention and interaction. This makes them loyal and sweet lap dogs who live for affection.

The best way to get a sense of what a blue Chihuahua puppy’s personality is to spend time interacting with their parents.

Even though they’re small, it’s important not to overlook socialising and training from an early age.

A small dog can easily be scooped out of unfamiliar situations. And it’s tempting to rely on doing so, rather than investing time and energy in positive socialisation experiences from a young age.

But, this can result result in a grown up dog who’s afraid of new people and unfamiliar places. Dogs like this are quick to bark and snap out of fear.

This is just as true of blue Chihuahuas as all other colors.

Ask about how your puppy will be raised before they come home with you. Nurture strongly influences a dog’s personality.

Next let’s look at whether a blue Chihuahua’s special genetic make up has any physical effects beyond the colour of their fur.

All Chihuahuas have some shared health concerns. Most common among these are:

In addition, there are some ailments which particularly affect blue Chihuahuas.

Let’s look at them next.

Color dilution alopecia (CDA) affects the coat and sometimes skin of a dog.

Initially the coat may become dull or thin. And eventually, the dog may suffer from hair loss and poor regrowth.

Hairless skin can be scaly and more susceptible to infection.

Diluted dogs have a higher risk of developing CDA. But researchers haven’t yet pinpointed why.

Though researchers don’t know exactly which genes are responsible for alopecia, they do know that certain mutations which cause dilution may have something to do with it.

One such mutation is known as MLPH c.-22G.A SNP. Even though it doesn’t seem to be solely responsible for CDA, researchers believe that it must be present along with other yet unknown factors for CDA to occur.

A more recent study, published in January 2018, has found another mutation that causes dilution. It is referred to as MLPH:c.705G>C and is responsible for dilution in dogs that do not carry MLPH c.-22G.A SNP.

However, there is not much research about whether or not this newly found mutation affects CDA.

When people think of this color dog they may also be thinking of blue merle Chihuahuas.

Interestingly, not all blue merle Chihuahuas have the dd genotype we learned about earlier.

In some blue merle Chihuahuas, the merle gene acts upon black pigment and results in a dog that has grey colored fur (much similar to the blue Chihuahua) with black patches.

Dilute blue merle Chihuahuas exist as well. These dogs do have the dd genotype. Their fur is light gray, with darker blue patches.

The merle pattern is very attractive. But the merle gene is a double-edged sword.

When a dog carries one copy of the gene, they inherit a merle coat, with a low frequency of side effects.

But if they inherit the merle gene from both parents – known as being double merle – they have a greatly increased risk of suffering serious eye and ear defects.

These defects can cause double merle dogs to be fully or partially blind.

Fortunately there are health tests available to breeders that help determine a dog’s likelihood of passing health issues to their offspring. DNA tests can identify if a dog possesses the merle gene.

If you’re interested in purchasing a blue merle Chihuahua, ask the breeder about both health tests and DNA tests.

Some dogs can actually carry the merle trait without expressing it. Good breeders are diligent to avoid mating two dogs who both might both carry the merle gene and pass it on to their puppies.

This ensures they produce only healthy dogs.

In many respects, blue Chihuahuas are just like all other Chihuahuas.

However, due to their coloring, they are at an increased risk for color dilution alopecia.

If you are particularly interested in bringing home a blue merle Chihuahua, take extra steps to make sure your breeder understands the inheritance and potential repercussions of the merle gene.

These dogs are very sweet with their owners. But it’s important to make sure they grow up confident and well behaved around other people and dogs as well.

Is your blue Chihuahua beautiful inside and out?

Tell us about them in the comments box below! And find Chihuahua name ideas here!

If you want to find out more about dog breeds that have interesting colors, take a look at the white English Bulldog guide!

Are you looking for more information about Chihuahuas? No matter what their color, this little breed is popular.

Find out more about them in our articles below:

Previous Post: « Treat Streaming In Dog Training – When And How To Do It!
Next Post: Golden Cocker Retriever – The Perfect Mixture Of Personalities?